A simple and convenient procedure was adopted for the synthesis of N-(3-acridin-9-yl-4-chloro/hydroxy-phenyl-alkyl)-arylamides/imides starting from 5-(arylamido/imido-alkyl)-2-chloro/2-hydroxy benzoic acids. The compounds were obtained in the yields ranging from 40 to 45% and exhibited less pronounced antiviral activity.

Acridine derivatives as antiviral agents have been less investigated however their antibacterial activity has been fully established [1-3]. The acridine compounds exert both bactericidal and bacteriostatic actions against both gram positive and gram Negative organisms and are not inhibited by the serum [4].

It has been observed that bacteria can acquire resistance to acridines on prolonged use [5,6]. In addition, later studies proved the usefulness of acridines against malarial infections. Some such acridines are chemically effective and are available in the market [7-9]. Our ongoing programme in the design and development of the potential bioactive compounds led us to undertake the synthesis of some acridine derivatives for studying their antiviral activity (Scheme). 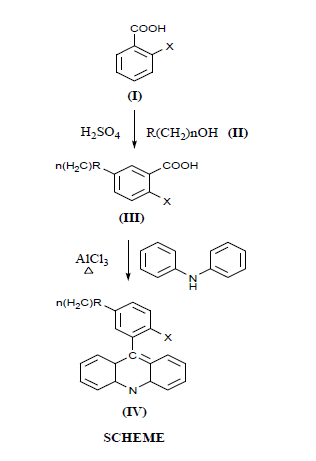 Literature methods [10-12] were followed for the synthesis of arylamido/imidoalcohols.

A mixture of an arylamido/imidoalcohols (ll) (0.01 Mole) and orthosubstituted benzoic acid (0.01 mole) was resolved in conc H2SO4 (50 ml) by stirring. During the course of dissolution the contents were cooled. The solution thus obtained was stirred mechanically for one hour and left under refrigeration overnight. It was poured into Ice cold water 250 ml slowly and carefully after each addition the stiring was done. When the addition was completed, the separated solid mass was allowed to settle down. It required about half an hour. The solid was filtered off and was successively with cold water and dried in vacuo. The crude amido/imidoalkylated acid thus obtained was recrystallized from acetone 5 (Benzoylamino-methyl) 2-chlorobenzoic acids, m.p. 134°C (133 to 134°C) [13] yield 75%

A mixture consisting of properly powdered diphenyl amine(0.9mole) and 5-(arylamido/imido-alkyl) -2- chloro/ 2-hydroxy benzoic acid (III) (0.0l mole) and anhydrous aluminium chloride (1.0 g) was heated in such a manner that the temperature did not increase 160o C for a longer period of times (11 hrs). Subsequently, dark green mixture was cooled till it attained the room temperature. The resulting solid was thoroughly washed initially with sodium bicarbonate (10%) solution to dissolve any unreacted carboxylic acid. It was further washed repeatedly with water and dried in vacuo. The crude acridine derivatives thus synthesized, were recrystallized from benzene and are recorded in Table 1(Because of the labrymatric nature of the acridine derivatives, these compounds were handled with much care.)

All the three acridine compounds displayed moderate to lower order of antiviral activity against TMV in vitro. However, in vivo antiviral activity against TMV was found to be less pronounced. From the anti -TMV activity data recorded in Table 3, it is clear that only one compound out of three , is showing some satisfactory virus inhibitory properly both in vitro and in vivo. Thus, the compound number 3 bearing R= phthalimido and X=OH exhibited antiviral activity to the extent of 50% in vitro and 30% in vivo. The acridine compound no. 2 having R= benzamido and X=OH showed a comparatively low order of activity. This compound provoked only 20% inhibition of TMV in vitro and no measurable degree of anti TMV activity in vivo could be detected. However the compound number one containing R=benzamido and X=Cl showed 30% and 10% anti TMV activity both in vitro and in Vivo respectively. It seems quite reasonable to suggest here that such compounds with other substituents need further probe for generating potential candidate molecules.