A Review on Synthetic Methods for Preparation of Praziquantel

A Review on Synthetic Methods for Preparation of Praziquantel

Schistosomiasis was controlled to the great extent by proper drug treatment, social awareness, health education and proper sanitary measures [4]. When a person exposed with fresh water containing schistomes, due to any recreational or occupational activities it leads to schistosomiasis. The late diagnosis and treatment may lead to anemia, high morbididty and stunting. Numerical cases were reported as fatal [5] that was treated with an anthelmintic drug Paziquantel [5,6]. Praziquantel is the active pharmaceutical ingredient which used for the treatment of all types of schistosomiasis with great success. According to WHO policy on supply and availability of Praziquantel at reasonable cost leads to control shistosomiasis all over the world [7] hence, it was declared Praziquantel as an essential drug.

The distribution of Schistosomiasis throughout the world has consequences on economic and public health. hence required proper action plan to control the schistosomiasis [8,9]. The use of the safe and efficacious drug praziquantel, control the morbidity caused by schistosomiasis. To date, there is no evidence of development of clinically relevant resistance. Still there are no alternative drugs to PZQ with the possible exception of oxamniquin, although perhaps PZQ analogues could be developed [10]. Hence, present review focused on the landmarks of praziquantel drug.

Diversified scheme used for the synthesis of poraziquantel

Priorly, the 2-Acyl -4-Oxo-Pyrazino-Isoquinoline derivatives synthesized and claimed by S. Jurgen, et al. It explains reaction of 4-Oxo- 1,2,3,6,7,11b-hexahydro-4H-pyrazino[2,1-a]isoquinoline with different acid chloride to form praziquantel and analogues compound. The reaction is carried out in chlorinated solvent like chloroform in presence of organic base triethylamine (Scheme 1) [11].

Berkowitz John, et al.were synthesized different heterocyclic tetrahydroisoquinoline, by internal imino-Diels Alder reaction with benzocyclobutenes and its derivatives (Scheme 2) [12]. The method of the tandem amidoalkylaion and N-acyliminium ion cyclization of amido-acetals was described by P. Joong H, et al. in the synthesis of pyrazinoisoquinoline derivatives including Praziquantel [13].

The patent KR2002076486 provided synthesis of praziquantel by reacting Phenylethylamine with chloroacetylchloride to obtain 2-chloro-N-phenethylacetamide which then undergo Gabriel Phthalimide reaction to give corresponding amine 2-amino-N-phenylethylacetamide followed by treatment with bromoacetaldehyde dimethylacetal to give 2-[2,2(dimethoxy ethyl) amino]-N-(2-phenylethyl) acetamide. The above intermediate on further cyclization and acylation using cyclohexanoyl carbonyl produced praziquantel [14]. The invention in CN1683346, by S. Yuhua, L. Furongm et al. involves a similar process as mentioned in patent KR2002076486, except first step which involved 2- aminoacetylchloride reacted with phenylethyl amine which procured 2-amino-N-phenyl ethyl acetamide [15]. The PCT application WO2009115333 comprised novel process for the synthesis of praziquantel. In situ reaction, phenyl ethyl isonitrile, aminoacetaldehyde dimethyl acetal, formaldehyde and benzoic acid offered the intermediate which on further reaction converted into praziquantel (Scheme 3) [16].

The synthesis of trioxaquantel derivatives as an innovative antischistosomal drugs involved process for synthesis of praziquantel and intermediates thereof [17]. The praziquanamine is synthesized by scheme,

Scheme 4 with four steps was claimed by S. Laurent J, et al. while five steps synthesis of praziquantel with low yield (16%) was reported by F. Yuste, et al. [18]. The compound N-(2, 2-dialkoxyethyl)(substituted-phenyl)alkylamines acts as intermediates in the preparation of heterocyclic compounds in the vein of tetrahydro–isoquinoline and its derivative thereof was described in US patent US3071613 [19]. The prevention of autoimmune diseases mediated by component or auxiliary of TNF-ot, NF-KB; IKK-ot, IKK-B, ATP-2 and p38 kinase by administration of praziquantel was stated in US 2006/0173011 [20]. The analogues of the praziquantel were exhibited diversified biological activity was due to, arrival of divergent substituent on aromatic ring of praziquantel. The researcher gave depth idea about different amino substituted with aromatic rings by keeping remaining moiety was unchanged. These results have great importance in the choice of drug development for schistosomiasis shown in scheme 5 [21]. Scheme 5: analogues of the praziquantel

The anthelmintic resinates and a method for their preparation was developed by L. Hughes, et al. in US patent US 2004/0180034 A1, which provided a pharmaceutical composition that consisting of a basic anthlemintic drugs such as Praziquantel, Epsiprantel, Droncit, etc. [24].

The multi-step synthesis of 2-Palmitoyl [1,2,3,6,7,11b]hexahydro-4H-pyrazino[2-la]isoquinoline-4-one a lipophilic, analogue of the Praziquantel which is compatible to the human metabolically and physiologically was put forwarded by A. Soliman, et al. [25].

The L. Balaya, et al. specified a novel and cost-effective process for the synthesis of Praziquantel by introducing novel intermediate, 2-[(2,2- dimethoxyethyl)benzyl amino]-N-phenethylacetamide. The synthesized Praziquantel was in novel crystalline form [26]. J. Seubert and H. Thomas discussed in the US patent US.4,866,056 preparation of praziquantel from Benzazepine [27], whereas one step reaction by condensation between 2-piperazinone with substituted benzoic acids which was substituted 4-(2-, 3- and 4-R)-carboxyphenyl-1,4-pyrazin-2-ones interpreted by R. Martínez, et al. [28].

Praziquantel synthesis steps involved (i) hydrolysis of 1, 2, 3, 6, 7, 11beta-hexahydro-4H-pyrazino[2,1-alpha]isoquinolin-4-one and phosphoric acid, distillation under vacuum, (ii) addition of deionized water for dilution and crystallization to observred a phosphate compound intermediate; (iii) acylation using cyclohexaformyl chloride in an organic solvent in the presence of base to obtain a praziquantel crude product; (iv) decolorisation and recrystallisation of crude gives pure praziquantel [29].

The praziquantel synthetic technology included beta-phenylethylamine, amino acetyl halide hydrochloride, halogenated acetaldehyde alcohol and cyclohexyl formyl chloride as raw materials, which undergo series of reaction like condensation, cyclization and acylation which results into praziquantel. The synthetic technology has the advantages of mild reaction conditions, room temperature and atmospheric pressure operation. Overall yield of the process is more than 50% [34].

The patent CN105622606 (A) by Y. Shunfu, et al. related for the synthesis of praziquantel involving is simple and safe steps (i) reaction on phenylethylamine with chloracetyl chloride; (ii) addition of the steps (i) into a hydrogen debenzylation solution to react steps (i) product (iii) steps (ii) product was decolorized; and (iv) cyclization with cyclohexyl formyl chloride in an alkaline medium procured crude praziquantel [35].

Recently in 2018, US patent US2018030049 (A1) prepared antihistaminic drug praziquantel and intermediates by reacting β-phenethylamine with chloroacetyl chloride, and subsequent substitution reaction with ethanolamine, and an acylation reaction with cyclohexanecarbonyl chloride, followed by an oxidation and cyclization. It also claim two key intermediates in the synthesis of praziquantel, specifically a compound of formula IV and a compound of formula V (Scheme 6) [36]. 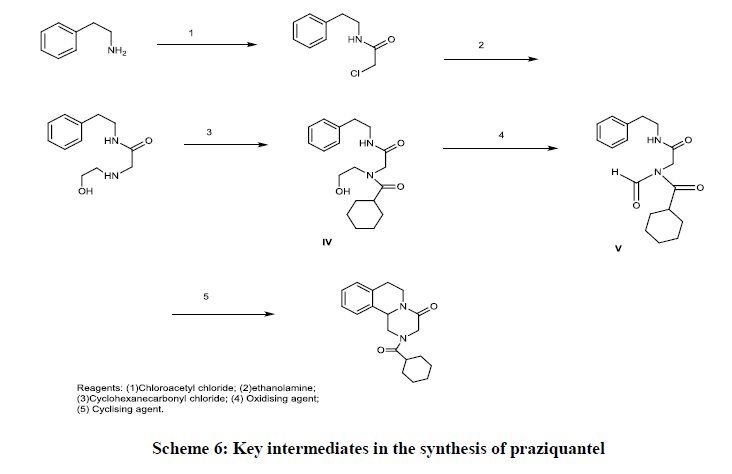 Scheme 6: Key intermediates in the synthesis of praziquantel

The method for the racemization of enantiomerically pure praziquantel under basic conditions and the process for the preparation of optically pure form of (R)- praziquantel was stated in patent CN107108607 (A) [37].

The simple, environmentally safe, one-pot synthesis was used in the production of praziquantel with the course of reaction containing acylation of beta-phenylethylamine by using chloroacetyl chloride and liquid caustic soda in dichloromethane as a solvent [38].

The optically pure (R)- praziquantel and its analogues with method of preparation was best explained by E. Luc, et al. The reactions proceed are stereoselective. It includes process which involves asymmetric hydrogenation of the intermediate compound (I) and its subsequent cyclization (Scheme 7) [39]. Figure 1: Production of intermediates of 4-benzyl-1-phenethyl-piperazin-2,6-dione

P. Roszkowski, et al. made available the process for preparation of enantiopure form of Praziquantel via asymmetric transfer hydrogenation according to the Noyori protocol (Scheme 8). The reduction of prochiral imine 4 affords product 5 in 62% ee, but a single crystallization leads enantiomeric purity to 98% ee [43].

The new intermediates for the synthesis of (R)-praziquantel and process for preparation involved - condensation, reduction and acylation followed by ring-closing reaction. It involves use of (1R)-2-substituted-1,2,3,4-tetrahydroisoquinoline-1-carboxylic acid as starting material. The said process provides optically pure (R)-praziquantel product, overall process is cost effective [47].

The current embodiment involved preparation of modified praziquantel derivatives and its evaluation against juvenile and adult stage of S. japonicumin. Most of the isolated analogs showed equivalent activity to the praziquantel. The in vitro and in vivo activity against worm’s japonuicum schistosomesis also deliberated. The compound with bromo substituent on the aromatic ring of praziquantel revealed close anti-schistosomal activity to parent drug praziquantel [49]. Thirty novel PZQ derivatives were described based on the Ugi 4-component reaction discussed by Haixia Liu et al. All derivatives were slightly less active than the mother drug PZQ [52]. A simple and sensitive method for the polarographic determination of praziquantel (1) after derivatization using Vilsmeier formylation is described [53]. Solid phase synthesis was also used for synthesis of praziquantel [54]. Synthesized praziquantel amide and urea derivatives had low to modest activity against juvenile worms while ketone derivative did not exhibited any activity. But combination therapy was worked against schistosomiasis [55]. The synthesized ferrocenyl derivatives of the drug praziquantel demonstrated anthelmentic activity in the micromolar range which was not sufficient for in vivo testing [56]. A structural variation in praziquantel analogues at piperazine, amide, and aromatic moieties influenced the modest to low activity against adult S. mansoni [57]. Cellulose derivative of praziquantel with chiral stationary phases was prepared with spacer reagent, bifunctional reagent of 3-(triethoxysilyl) propyl isocyanate which affects the resolution [58].

The reaction of praziquantel and furoxan moieties in a single entity produces hybrid compounds called NO-donor praziquantel exhibited biological activity. All the derivatives show activity to inhibit recombinant S. mansoni thioredoxin glutathione reductase (TGR) [59]. Wang, et al. described synthesis and the structure-activity relationship studies of newly synthesized praziquantel derivatives. Most of the derivatives showed better biological activity against S. japonicum than praziquantel whereas some of them were less effective for treatment of schistosomiasis [60]. Number of researchers synthesized and analysed praziquantel and derivatives with structural modification they show inhibition of Schistosomiasis, with less or more efficacy.

The praziquantel is well known for its anthelmintic activity. Modification in aromatic ring at C-10 with hydroxyl group of praziquantel showed multi fascinated activity than the praziquantel. Researcher used single step, two steps and multi steps reactions for the synthesis of praziquantel. Many intermediates and there derivatives are ecofriendly, easily available, having high efficacy hence used to treat infectious diseases such as all types of schistomes and liver flukes. The review reported mode of synthesis and resolution with scope of modification in praziquantel synthesis. Because mentioned methodologies are associated with disadvantages like strong reagents used in synthesis, harsh reaction condition, expensive raw materials, excess use of organic and halogenated solvent etc., as praziquantel is broad spectrum essential drug, it is crucial to develop simple, cost effective, green and time saving method to synthesize praziquantel.