In the present research, application of central composite design (CCD) was used for optimization of Cr (VI) removal from aqueous solution using Boodlea struveiodes, green marine algae as an adsorbent material. Batch biosorption experiments were conducted according to CCD which is a subset of response surface methodology. The influence of various process parameters such as contact time, pH and biomass dosage on the removal process was investigated. Furthermore, it is essential to understand the effect of process parameters to define the best possible conditions for adsorption, therefore, these factors were considered and a total of 16 trials were run according to the CCD. From the Analysis Of Variance (ANOVA) table and R2 value (0.9707), quadratic model was predicted to be significant with the best fit to the experimental data.

Rapid industrialization has led to increase disposal of heavy metals into the environment. Hence effluent treatment is one of the most important task for industry due to their toxic nature and accumulation through food chain as non-biodegradable pollutants [1,2]. The researches to remove heavy metals from industrial effluents have attracted attention of scientists and research scholars to quest for green technology [3].

Chromium (VI) is one of the toxic heavy metals that are present as chromate, CrO42- and dichromate, Cr2O72- in waste water [1]. Cr (VI) ions pose a severe threat to the environment [4]. Cr(VI) ions are released into the surroundings due to an extensive use of this metal in many industries such as wood processing, leather tanning, plating, dyes and metallurgy, etc. The persistent nature of Cr(VI) leads to accumulate in the food chain which with time gets harmful levels in living beings resulting in serious health hazards [5]. Therefore, removal of Cr(VI) from waste water prior to its discharge into natural water systems is essential.

Many physicochemical methods to remove heavy metals from wastewater have been developed so far. These techniques include ultrafiltration, precipitation, electrochemical deposition, reverse osmosis, ion exchange, coagulation and solid phase extraction [3]. Most of the methods have disadvantages such as incomplete metal removal, high regeneration cost, high reagent and energy needs. Hence, cost effective alternative technologies have to develop for the removal of heavy metals from industrial effluent.

In recent years, new approaches with biosorbents involving the use of inexpensive and efficient alternative methods in removing heavy metals from aqueous solution have been developed [6]. Among the most promising types of biosorbents studied is the algal biomass. These algae possess a high metal-binding capacity. This is due to the presence of various functional groups such as carboxyl amino, sulphate and hydroxyl groups on the cell walls which can bind the metals in the aqueous solution [7].

The present study has been conducted to evaluate the potential of the marine algae Boodlea struveiodes for Cr(VI) removal from aqueous solution with an aim to develop suitable operational strategy for wastewater treatment. The effects of pH, initial Cr(VI) concentration and biosorbent concentration on Cr(VI) removal from aqueous a solutions were studied using Cr(VI) solution in batch mode. An attempt was made to fit the equilibrium data to Langmuir, Freundlich and Temkin adsorption isotherms.

A stock solution of 1000 mg/l of Chromium was obtained by dissolving required amount of potassium dichromate, K2Cr2O7 in distilled water. The test solutions of different concentration ranging from 20 to 100 mg/l were prepared from the stock solution. The pH of the solutions was adjusted by using 0.1 N HCl and 0.1 N NaOH solutions by measuring with pH meter [8].

Marine algae, B. struveiodes was collected from coastal area of Visakhapatnam, A.P, India. The algal biomass was washed with distilled water for several times to avoid the effect of salt and then dried in a hot air oven at 50-60°C temperature to constant weight. After that the dried biomass was ground and sieved to various particle sizes ranging 75 to 112 m. The effect of pH

The pH of the solution decides solubility of metal ions and binding capacity of biomass through functional groups of the biomass cell walls. It was noticed that the uptake of chromium increased with an increase in pH from 2 to 5 and then decreased on further increase in pH. Biosorption (Figure 2) of chromium onto B. struveiodes was significant at pH 5 (76.43% Cr). Batch study revealed that the metal uptake of chromium increased and percentage biosorption of Cr decreased with an increase in the initial metal ion concentration (Figure 3) from 20 mg/l to 100 mg/l. The reason to get high % biosorption at lower concentrations of metal solution was due to provide more number of binding sites to adsorb more number of metal ions with good interaction between them. The percentage biosorption of chromium ions onto B. struveiodes was decreased from 74.10 to 44.10%. 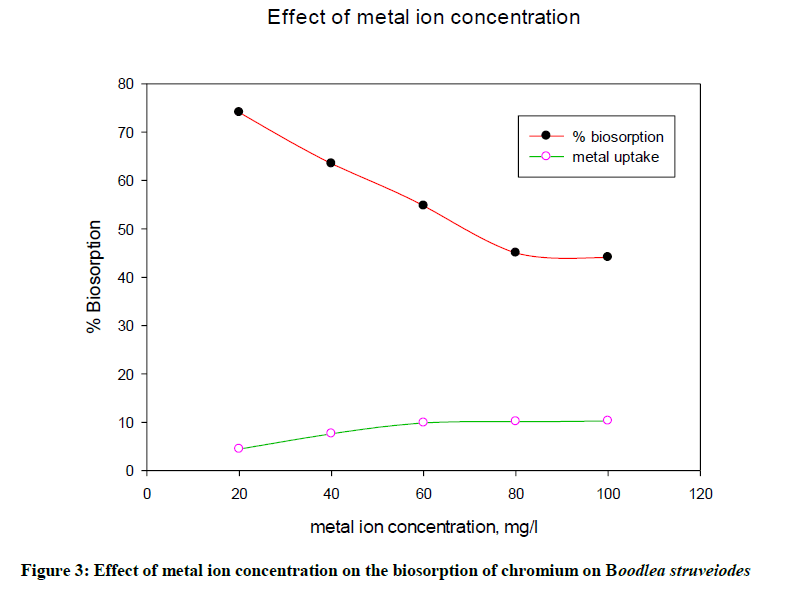 Adsorption intensity of metal ions on the biosorbent (Figure 4) is based on the surface of contact between adsorbent and the metal solution. More is the surface of adsorbent; more is the adsorption due to provide more binding sites to bind metal ions. The effect of B. struveiodes particle size on the removal of chromium and was calculated using various sizes of biosorbent ranging 75-212 μm. From the experimental data obtained, it was cleared that % biosorption of chromium at equilibrium was decreased (74.10 to 58.50 %) with increase in the biosorbent particle size. To determine the effect of B. struveiodes dosage on the adsorption, batch experiments were conducted separately by varying the biomass quantity from 0.1 to 0.5 g to get maximum adsorption. Figure 5 indicated that % biosorption of chromium on B. struveiodes was increased (74.10 to 76.42%) with increase in the dosage of biosorbent from 0.1 to 0.5 g. This can be explained by the fact that more is the dosage of biosorbent, more is the surface of contact, and hence it offered more reacting sites to adsorb metal ions. Biosorption isotherms gives the distribution of metal ions between the liquid and solid phases and can be described by several mathematical relationships such as the Langmuir, Freundlich and Temkin (Table 1) models as shown in the Figures.

Freundlich (Figure 6) gave an empirical expression representing the isothermal variation of adsorption of a quantity of gas adsorbed by unit mass of solid adsorbent with pressure. Logarithmic plot of sorbed and equilibrium concentration gives a straight line with R2 (0.9249). The data described the fitness of the isotherm. Langmuir isotherm described a relationship between the number of active sites and pressure. At the maximum biosorption, only a monolayer is possible. In the Figure 7, Ceq / qeq is plotted against Ceq yielding a straight line with R2 (0.9961) showing that biosorption data were fitted well with the Langmuir model. The effects of indirect adsorbate-adsorbate interactions on biosorption isotherms are considered by Temkin and Pyzhev. As a result of adsorbate/adsorbate, a linear decrease is observed in the heat of biosorption of all the molecules in the layer [9]. Figure 7 shows the linear plot and the data was analyzed according to the linear form of the Temkin adsorption isotherm (Figure 8). After verification the total data, it gives a close fit to the chromium biosorption. To evaluate the performance of biosorbent material, experiments were carried out in a batch system. The biosorbent material with a specific mass was taken in a 250 ml experimental flask containing the chromium metal solution and adjusted the pH by adding 0.1 N HCl and 0.1 N NaOH solutions. The flasks were shaken at a constant agitation speed in an orbital shaker and % adsorption of chromium on biomass was measured by AAS (atomic adsorption spectroscope). The experiments were conducted by varying specified variables such as initial Cr(VI) concentration, pH of the solution, dosage of biosorbent, agitation time and biosorbent particle size to get optimum values.

The significance of various parameters was studied using central composite design, CCD which is a subset of RSM (Response surface methodology). The response was expressed as the percentage of biosorption of chromium onto the biomass, CCD with 16 experiments, which includes 8 cubic point runs, 6 center point runs and 2 axial point runs, were used to optimize of process parameters. In this study, statistical software STATISTICA 6.0 (Stat Soft Inc.) is used as an optimization tool for linear, quadratic and interaction effects of three factorspH, initial Cr (VI) concentration and dosage of B. struveiodes. The amount of adsorbed Cr (VI) was calculated according to the following equation [10]:

Where, C0 & Ce are initial and final concentration of the metal ion.

Central composite design (CCD) is useful for the modeling and analysis of process in which a response of interest is influenced by several parameters and the objective is to optimize this response. In biosorptive removal processes, CCD has been introduced to optimize and assess interactive effects of independent factors. It is the most useful choice for fitting a second order model. It consists of factorial points (from a k2 design), central points, and axial points. Based on these points, the total number of experiments designed by CCD will be

The coded values of the independent variables were measured by the following equation [12] (Table 2):

Table 2: Experimental design and response in terms of coded values

Where, y is the response, Xi (i = 1-4) are non-coded variables, βi, βii and βij are the linear, quadratic and second-order interaction coefficients.

The statistical significance and adequacy of the model was further justified by analysis of variance (ANOVA) (Table 3). The values of Prob> F less than 0.05 reflects the model terms as significant [12]. ANOVA for the model with respect to biosorption of chromium (VI) onto B. struveiodes can be noticed in the Table 3. The model p-value 0.000286 indicated the justification of the model's significance. The model terms X1, X2, X3, X12, X22, X32 were significant and X1X2, X1X3, X2X3 were insignificant to the response. The regression coefficient of determination (Table 4) (R2=0.97071) indicates that 97% of the variability in the response is explained by the model. From the statistical results obtained, it can be found that the model was suitable in predicting Cr (VI) removal within the range of the derived variables. Numerical Optimization using CCD led to the optimized variables as pH of 5.6, initial Cr (VI) concentration of 40.64 mg/l and dosage of B. struveiodes of 0.3 g yielding Cr (VI) removal of 97.07 % (Table 5) (Figures 9-12).

Table 5: The experimental values and predicted values for the biosorption of chromium Figure 9: Response surface plot of pH vs. concentration for the biosorption of chromium Figure 10: Response surface plot of pH vs. dosage for the biosorption of chromium Figure 11: Response surface plot of concentration vs. dosage for the biosorption of chromium All the results of present research indicated that B. struveiodes can be used an economical and effective biosorbent for Cr(VI) removal from wastewater. Experiments were performed as a function of pH, initial Cr(VI) concentration and biomass dosage. The equilibrium contact time of chromium with biosorbent was found to be 20 min. The Central composite design was successfully used to develop a mathematical model for predicting Cr(VI) removal. Experimental data satisfactorily matched the quadratic model obtained from CCD. The optimized values using Central composite design are: pH=5.6, dosage of B. struveiodes (w)=0.3 g, initial Cr(VI) concentration(C0)=40.64 mg/l and maximum biosorption=97.07 %. The biosorbent B. struveiodes used in the present study is abundantly available and at almost free of cost and thus may become a potential alternative to conventional biosorbents. 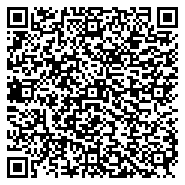