Background and Objective: Schinus molle L. (Family: Anacardiaceae), also known by the Pepper tree (in English) and Qundo berbere (in Amargna). American/ Peruvian pepper is an evergreen tree of culinary and has medicinal importance. It’s essential oil (EO) has proven bioactivities. The aim of this study was to determine chemical composition of essential oil of leaves of S. molle growing in Haramaya University (HU) Main Campus (Dire Dawa, Ethiopia).

Conclusion: Comparison with the previous studies on essential Oil of S. molle from the different part of the worldsuggested twenty compounds were exclusively present only in HU EO sample. Compounds like elemol, spathulenol, β & γ-eudesmol were found to occur in highest concentration only in HU EO. Thus, the present investigation recommended that S. molle growing in HU-Main Campus comprises of a number of volatile compounds which are not accounted in other S. molle EO’s around the world.

Essential oil extracted from the plants is of great importance and are used as food preservatives in pharmaceutical industry, in perfumes and cosmetics. The essential oil content and its chemical composition varies from place, altitude and season. Reports are available on essential oil from different plants and their activities [1,2]. Schinus molle is a tree and well known for its essential oil.

S. molle is one of essential oil yielding plant and some other common name of it are peppertree, false pepper or pirul [3]. It is a drought tolerant, long-lived, woody evergreen tree which becomes a serious invasive weed internationally [4]. S. molle is native species that found in Northern South America and Peru's Andean deserts and vigor to Central Chile and Central Argentina [5]. The plant is planted as an ornamental plant and also for spice production around the world. It is used traditionally for the treatment of infections and wounds [6]. It is also used to get relief from the toothache, rheumatism, menstrual disorders and also shows antidepressant and diuretic properties [7-9]. On the other hand, it has been observed that S. molle shows insecticidal properties which can be used as a substitute to synthetic chemicals that are used in pest control. The toxicity of ethanolic extract of S. molle has been evaluated in rats [10].

In Ethiopia, the plant is widely grown throughout the country from Afar lowlands to 2400 m as ornamental and shade tree especially in the towns and cities of the Rift valley in Ethiopia [11]. Its branches are commonly placed on dining tables in hotels, restaurants and resident places to repel houseflies. Previous reports suggested that essential oil of S. molle comprising 50 constituents showed the antifungal activity [12]. The essential oil of S. molle leaves also shows significant antibacterial and antifungal activity against bacteria and fungi [13] Nevertheless, the present study was focused on analysis of the essential oil from S. molle growing in Haramaya University (HU-Main campus) and comparison of the GC-MS profile with data on S. molle available around the world.

Description of the study area

Haramaya University (HU-Main Campus) is situated at latitude of 9°0’ north of the equator and 42°03’ longitude east of meridian (Figure 1). The Haramaya university is extended over area equal to 46 km2. Average temperature is about 16°C and average rainfall is 780 mm [14].

GC-MS). GC-MS analysis was performed with an Agilent6890 N gas chromatograph coupled to Agilent 5975 B and Agilent chemstation software manufacturer Agilent Technologies) Separation of oil constituents was performed on DB-5 capillary column (30 m × 0.25 mm, film thickness: 0.25 μm). The temperature program was as follow: isotherm at 50°C for 2 min, then ramped at 3°C min-1 to 300°C and finally held at this temperature for 10 min. Helium was used as carrier gas at a flow of 1 ml min-1. One microliter of diluted oil samples in hexane was injected in the splitless mode. Identification of individual compounds wasperformed by matching their mass spectral fragmentation patterns with corresponding data (NIST 08 and WILEY 8 libraries). 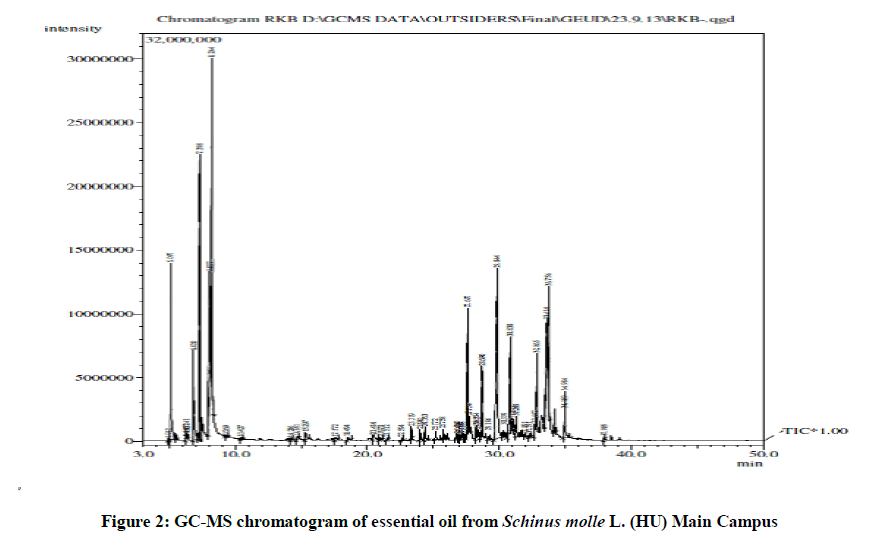 Nevertheless, forty compounds were reported in one or the other S. molle samples from five countries around the world, that was absent in HU sample. Oxygenated monoterpenes like linalool, α-terpeniol were observed only in Algerian & Brazilian S. molle EO’s. Similarly, monoterpene hydrocarbons like α-thujene, myrcene, p-cymene, terpinolene, oxygenated monoterpenes like terpinen-4-ol were observed only amongHU, Algerian& Brazilian Eosamples; withγ-terpinene being uniquely reportedin higher percent abundance only in HU sample apart from Brazilian S. molle variety.

It has been also interesting to note that α-pinene was the only compound that has been present in all the S. molle essential oil samples reported around the world; where Ethiopian variety exhibiting the highest concentration compounds like elemol, spathulenol, β & γ-eudesmol were found to occur in highest concentration in HU variety. Ironically, α-phellandrene one of major monoterpene hydrocarbons detected was found to be lowest in concentration in HU EO sample,when compared to other S. molle oil samples around the world.

In the present study essential oil of S. molle contains elemol (12.75%). Elemol (C15H26O), the sesquiterpene alcoholis found to be the major constituent of EO’s present in several aromatic plant species. Out of 52 compounds reported in Cassia tora (Fabaceae), elemol (26.9%) is found to be the major constituent [15] which is well-known for the treatment of jaundice, ringworm, constipation & leprosy. In another study,β-elemol (18.29%), one of the major constituents of essential oil obtained from Cryptomeria japonica which possess strong larvicidal activity against Anopheles gambiae larvae (LC50-29.27 μg/ml; LC90-103.21 μg/ml) [16] Elemol has also been proved to possess insecticidal & anti-termite properties [17] Similarly, limonene (C10H16), the cyclic terpene is also found to be in high concentration (18.23%) in HU sample. D-limonene is one of the common terpenes in nature that possess gastric neutralizing & chemoprotective activities [18]. Ironically, sample from S. molle prevalent in Mekelle (Ethiopia) is predominated by α & β phellandrene (20.6 & 10.8%) whereas limonene & elemol were absent [19]. α-pinene (C10H16) & p-cymene (C10H14) were also found to be the major components (6.51 & 6.7%) in HU sample. α-pinene & p-cymene were observed to be the predominant compounds in EO of the China fir. (Cunninghamia konishii that was detrimental to several fungi i.e. Trametes versicolor, Lenzites betulina, Laetiporus sulphureus, and Gloeophyllum trabeum, L. sulphureus [20]. Spathulenol (5.52%) one of the predominant oxygenated sesquiterpenes in S. molle from HU has proven bioactivities. Essential oil from Annona verpretorum L. was detrimental to Trypanosoma cruzi epimastigotes (IC50: 31.9 ± 1.3 μg/ml-1) and Candida tropicalis (MIC: 100 μg/ml-1). Out of 18 compounds detected in A. verpretorum,bicyclogermacrene (43.7%) & spathulenol (11.4%) were the predominant components [21]. Another research has showed similar compounds as major components in S. molle oil [22-23], when compared to present study.

Regarding bioactivities of S. molle EO from Ethiopia, Cis-menth-2-en-1-ol and trans-piperitol from Ethiopian S. molle were found to repel Musca domestica [24]. Aqueous extract of S. molle from Gondar Region (Ethiopia) at 5 and 10% concentrations exhibited 100% repellency against the cabbage aphid Brevicoryne brassicae [25]. Ethiopian S. molle EO at 0.75% concentration exhibited 100% mortality of Anopheles arabiensis mosquito (Bishoftu Strain: F51-61) [26-38]. On the contrary, methanolic extracts of fresh leaves of S. molle did not exhibit antifungal activity against the banana anthracnose agent, Colletotrichum musae, attributing the bioactivity only to the terpenoidal EO components [26]. Worldwide comparison of components obtained from essential oil of S. molle leaves was done in present study. Purified major compounds either as single entities or in combinations will be carried out in future to make better understanding of functions with various bioactivities.

Comparison with the previous studies on essential Oil of S. molle from the different part of the world suggested twenty compounds were exclusively present only in HU EO sample. Compounds like elemol, spathulenol, β & γ-eudesmol were found to occur in highest concentration only in HU EO. Thus, the present investigation recommended that S. molle growing in HU-Main Campus comprises of a number of volatile compounds which are not accounted in other S. molle EO’s around the world. This study discovers that twenty compound were uniquely present in essential oil of S. molle from Haramaya University, that can be beneficial for their medicinal application. This study provides a baseline data to explore the essential oil of the plant for domestic as well as for industrial purposes. 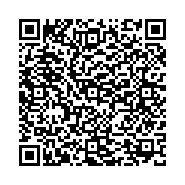