This project investigates the effect of polymeric binders and internal lubricant on mechanical properties and microstructure of sintered alumina. Three different formulations of alumina-binders were used which contained 3 wt% of Polyethylene Glycol (PEG) and various amount of polyvinyl alcohol (PVA) from 1 wt% to 3 wt%. About 3 wt% of stearic acid was used as an internal lubricant. Spray dry is the method that used to coat alumina powder with binders. Thermogravimetry analysis (TGA) was applied to determine the decomposition temperature of binders in the alumina-binder samples. Diametral compressive test was conducted to determine the tensile strength meanwhile the microstructure of fracture surface of sintered alumina was characterized by means of Scanning Electron Microscope (SEM). The TGA analysis results show the suitable temperature for debinding process is 450oC. It is shown that the shrinkage of sample is increased with increasing the binder content and it has achieved to the maximum of 45 % after the sample was sintered at temperature of 1600oC and 1700oC. Alumina sample which have formulation of 2 wt% PVA and 3 wt% PEG binders and sintered at temperature of 1400°C shows the highest tensile strength (68.4 MPa). The presence of 3 wt% stearic acid has given detrimental effect on the mechanical properties of the sintered alumina.

Alumina, which is also known as aluminum oxide (Al2O3) has good chemical and thermal stability, relatively good strength and well electrical insulation characteristics This material is popular and has very wide range applications such as high temperature and electrical insulators, filter, abrasive, catalysis and biomaterials [1].

The steps of alumina processing are preparation of dried alumina powders, mixing ceramic powder with binders, forming and sintering [2,3]. In alumina processing, binder plays an important roles to improve the mechanical properties of green bodies before sintering [4]. Binders provide strength to the green ceramic body by forming bridges between the particles [2]. Binder content would be such that it will give adequate strength and not to create microstructural defect in green body during binder burnout step. Hence, selection and optimization of binder plays an important role in shape forming of ceramic products [4]. Most common binders used are long chain polymers such as polyvinyl alcohol (PVA) [5] and polyethylene glycol (PEG) [6]. Besides binders, internal lubricant is also important to reduce the friction between particles and die wall during fabrication of green body. It plays an important role in the closure of large inter-granular pores after sintering and reduces the shear between two surfaces of particles during the forming process. The optimised binder-lubricant composition is one of important parameter to obtain uniformly shaped ceramic granules [3].

The most common technique to mix binder with ceramic powder is by physical mixing. However, this conventional technique has disadvantages as the ceramic powder did not homogenously mixed with binders and subsequently will cause microstructural defects which lead to poor mechanical properties of the sintered ceramic. Spray dry technique is another alternative technique that can be used to produce ceramic-binder granules. It is one of several versatile processing methods for the manufacture of ceramic-binder granules [3]. This technique will produce the low shear strength of granules ceramic powder and the process may contribute to a novel and industrially viable approach to the manufacturing of ceramic in which the number of processing steps and overall processing time will be reduced. The process is also economical, convenient and beneficial with producing high quality components for advanced application [3].

The aim of this work is to study the effects of polymeric binders composition, sintering temperature and internal lubricant on the mechanical properties and microstructure of sintered alumina. The ceramic-binder granules were prepared by spray dried method.

The ceramic materials used in these studies was commercial alumina with 0.6 micron average particle sizes. The two different polymeric binders were polyethylene glycol (PEG) and polyvinyl alcohol (PVA). Table 1 illustrates four different batches of alumina-binder formulations as prepared by spray dried method. The composition used was a mixture of fixed amount of PEG (3 wt%) and varies amount of PVA from 1 to 3 wt%. The stearic acid was used at 3 wt% as internal lubricant.

PVA was dissolved in distilled water at 80°C and PEG was added into the water and stirred for 30 minute before added with alumina and continue stirring process for 2 h to form alumina slurry. In the cases of adding internal lubricant into the solution, 3 wt% of steric acid was added and stirred to form alumina slurry (sample V3G3S3). Finally, the alumina slurry was dried using spray dryer technique. The nozzle of the spray drier was operated at a set atomizing pressure and feed rate at 20°C/min. The inlet and outlet temperatures were set at 190°C and 90°C respectively. The constant weight of dried alumina-binder granules were pressed by Carver hydraulic machine, operated at 4.5 tonnes pressure into circular disk shape to ensure the alumina disk achieved 60% relative density.

A disk with diameter of 15 mm and 5 mm thickness were prepared for all alumina-binder formulations. Debinding operation at 450°C for 3 h at the heating rate of 3°C min-1 in the electrical furnace was done to remove the binders. The sintering process was eventually conducted in air using furnace (Model Carbolite HTF 17/10) at temperatures of 1200°C, 1400°C, 1600°C and 1700°C.

Thermogravimetri analysis (TGA) (Model Mettler Toledo TGA/SDTA851/SF) was used to determine the degradation temperature of binders in the alumina-binder samples. The heating condition was from room temperature up to 900°C at a heating rate of 10°C min-1 in atmosphere of nitrogen. The mechanical strength of sintered alumina was evaluated using the diametral compression method known as “Brazilian test” [7,8]. The disk-shaped samples were inserted in the universal testing machine (Model Instron 3382) and the load cell applied was 100 kN. The load, F applied radially at a speed rate of 0.5 mm min-1 until the specimen fractured. The tensile strength of the sample (σ) was calculated using the formula [2]:

Where, Fmax is the load applied at fracture, D is the diameter and e is thickness of the sample.

Figure 2 shows the TGA curves for different formulation alumina-binder samples. The result shows the drastic weight loss from temperature 150°C until 300°C due to degradation of PVA component. The weight loss continues to increase above 300°C to 450°C was corresponded to degradation of PEG component. The weight is unchanged above 450°C until temperature 1000°C which indicates all binders were completely degraded and left alumina component. From the analysis, the suitable debinding temperature for alumina-PVA/PEG binders systems is suggested at 450°C. 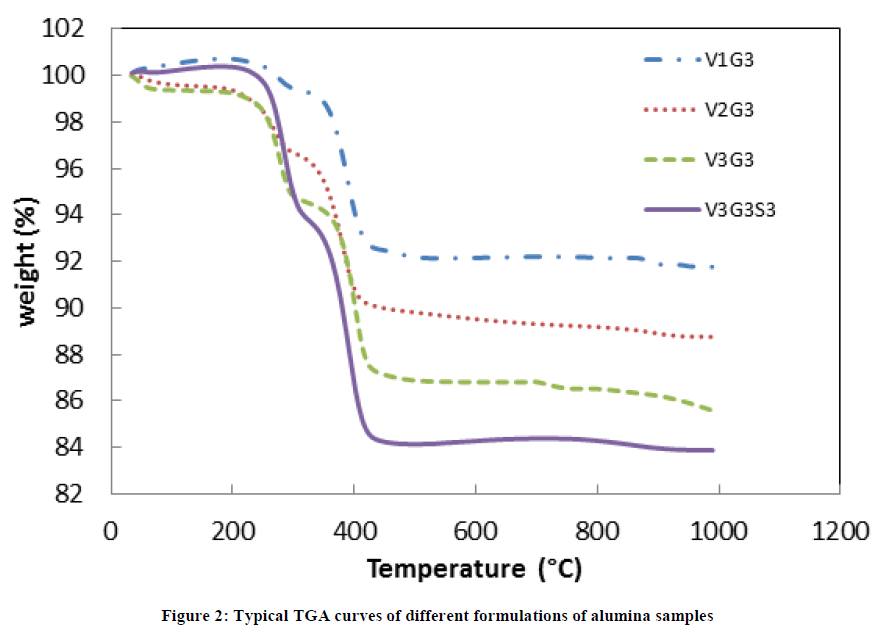 Figure 4 shows the tensile strength of alumina sintered at different temperatures. It is interesting to note that alumina with 2 wt% PVA and 3 wt% PEG exhibited the highest tensile strength (67.8 MPa) at sintering temperature of 1400°C and the strength is not significantly reduce at 1600ºC. Sample V1G3 has lower tensile strength compared to sample V2G3 since low percentage of PVA added resulted in less bonding between the alumina particles. Thus the alumina particles do not fused well during sintering process. However, it can be seen that sample V3G3 has lower tensile strength compared to V2G3 sample. This results indicates that the higher binder composition may results larger porosity after burnout of binders. Large porosity causes the densification of compact cannot be achieved effectively, subsequently it creates low tensile strength. 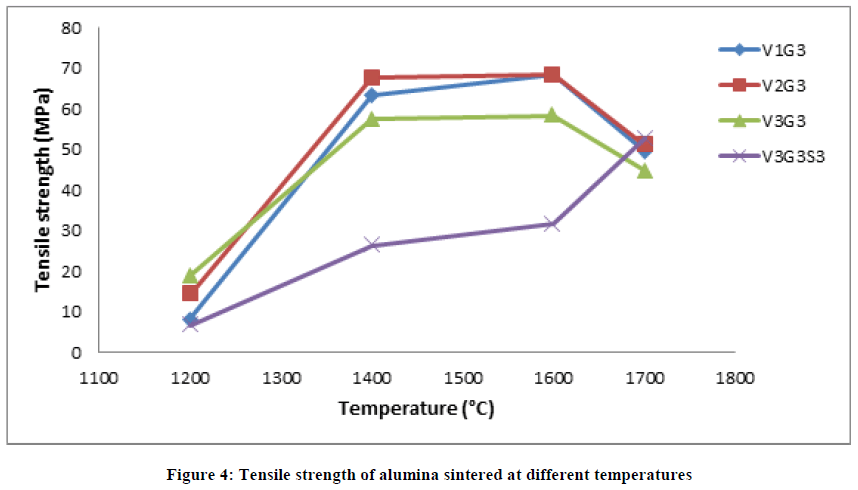 The effect of lubricant can be seen when sample V3G3 is compared to V3G3S3. The tensile strength of sample without lubricant (V3G3) is greater than the sample with lubricant (V3G3S3) at all sintering temperatures except at 1700°C. This phenomenon is expected since the presence of large amount of stearic acid (3 wt%) will increase the percentage of organic component in the formulation, thus it increase the porosity and reduce the mechanical properties of sintered alumina. It is believe that the stearic acid may also evaporate to form bubbles on the surface of the alumina sample and this phenomenon can be seen in Figure 5 and prevent in SEM analysis. The forming bubble in the sample will subsequently reduce the mechanical properties of the alumina sample. Figure 5: Bubble formed on the surface of alumina pellet for V3G3S3 sample

Figure 6 show the SEM micrographs of fracture surface of V3G3 and V3G3S3 samples after sintering at 1600°C. By observing the porosity that highlighted in the two figures, V3G3 sample which is the sample without stearic acid has less porosity compared to the V3GSS3 sample containing stearic acid. This result is supported by the density data of the two samples that underwent the SEM analysis as V3G3 sample has higher density (3.563 g/cm3) than V3G3S3 sample (3.475 g/cm3). Higher density means the sample is more packed thus resulting in lower porosity. The function of internal lubricant is to reduce the internal friction particles between particles in order to pack the compact more tightly [8]. However, due to too much stearic acid presence in the sample, it might cause the bonding between alumina particles become weak. Thus, it gave detrimental effect to mechanical properties. These observations of SEM fractures are in agreement with the mechanical strength as shown in Figure 6. 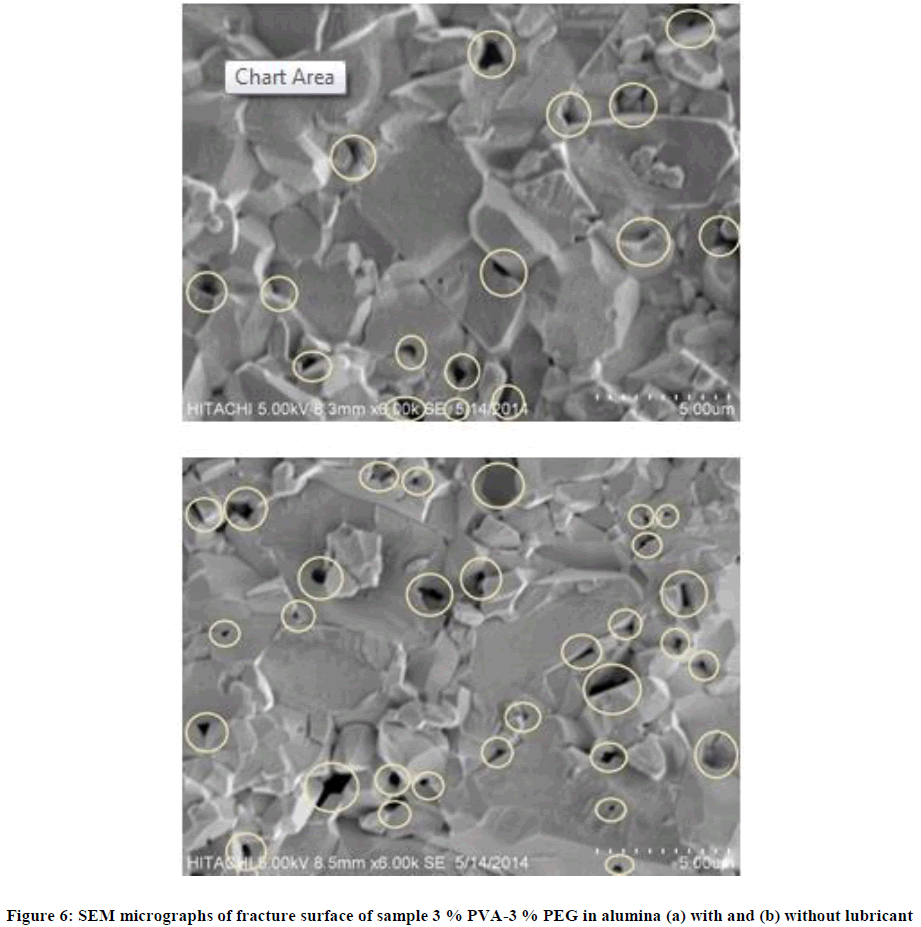 Figure 6: SEM micrographs of fracture surface of sample 3 % PVA-3 % PEG in alumina (a) with and (b) without lubricant

The composition of binders gave significant effects on the mechanical properties. Alumina sample containing 2 wt% PVA and 3 wt% PEG binders and sintered at 1400°C shows the highest tensile strength. The presence of 3 wt% internal lubricant in alumina with 3 wt% PVA and 3 wt% PEG sample increased the porosity in the microstructure, thus reduced the mechanical properties of sintered alumina. Therefore, results obtained in the present work suggest that the composition of internal lubricant need to be controlled below 3 wt% in order to produce uniform alumina compacts with homogenous grain distribution and dense microstructure, hence good mechanical properties.