A semi organic L–Threonine Ammonium Acetate (L-HAA) crystal has been grown at room temperature by using slow evaporation technique. Single crystal X-ray diffraction analysis reveals that the grown crystal crystallizes in the non-centro symmetric space group C2 of tetragonal crystal system. Infrared spectral analysis has been done to confirm the presence of functional groups in the grown crystal. Thermo gravimetric analysis reveals that the grown crystal is thermally stable upto 201ºC. The second harmonic generation output intensity was confirmed using the Kurtz and Perry powder method and it is found to be 0.986 times lesser than that of KDP.

Progress in science of crystal growth has made great revolution in many fields like microelectronics, computer industries etc. The utility of crystals are the backbone of the modern technology and has been extended for several useful applications in optical, electrical and optoelectronic devices. Researchers are concentrating on growing large sized single crystals in short duration with less cost for device fabrication. Nonlinear optical (NLO) materials are expected to play a major role in photonics including sensors, data storage, optical information processing etc. Progress in these areas would be highly intensified by the materials with sufficient large NLO efficiency for various device embodiments. Amino acids are bi-functional organic molecules find its applications in non-linear optical field due to its zwitter ionic nature [1]. L-threonine is one such amino acid consists of consist of deprotonated carboxylic acid (COO-) and protonated amino group (NH3+) and the crystal structure was first solved by Shoemaker et al. [2]. In the present communication L-threonine is taken up the subject of interest. Janczak et al. reveals that L-threonine crystallizes in non-centrosymmetric P212121 space group with 4 zwitter ionic molecules in the unit cell linked by a 3-dimentsional network of hydrogen bonds of unequal strength [3]. The attempt has been made by many researchers to study the non-linear optical properties of amino acid [4-9]. Ammonium acetate is an important intermediate and catalyst for many chemical reactions also associated with its toxicities like flaccidity of facial muscles, generalized discomfort, tremor, anxiety, and impairment of motor performance [10]. It serves as a nutrient material like food additive, antidiuretic and aqueous buffer for proteins [11-14]. Trivedi et al. studied the vibrational spectral analysis of ammonium acetate [15]. Recently Joshi et al. has studied the effect of L-threoniine on ADP single crystals and they confirms that the second and third harmonic generation efficiency is double that of KDP [16]. As far as all the authors knowledge concerned, this is for the first time we report the vibrational, thermal and non-linear optical properties of L-threonine ammonium acetate single crystal. Figure 1 shows the photograph of the grown crystal. 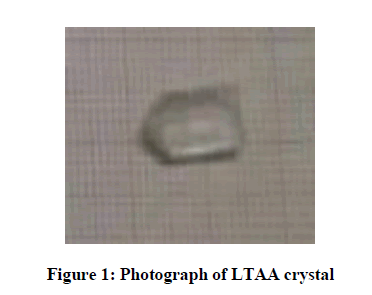 The calculated amounts of the AR grade starting materials are L-Threonine and Ammonium Acetate are taken in equal molar ratio were dissolved in Millipore water. The mixture is thoroughly stirred well for 5 hours to get the homogenous solution. The chemical reaction is given below,

Then the solution is filtered and allowed to evaporate slowly at room temperature. After the period of 28 days, a colorless and optically transparent crystal of L–threoninium Ammonium Acetate (LTAA) is obtained. 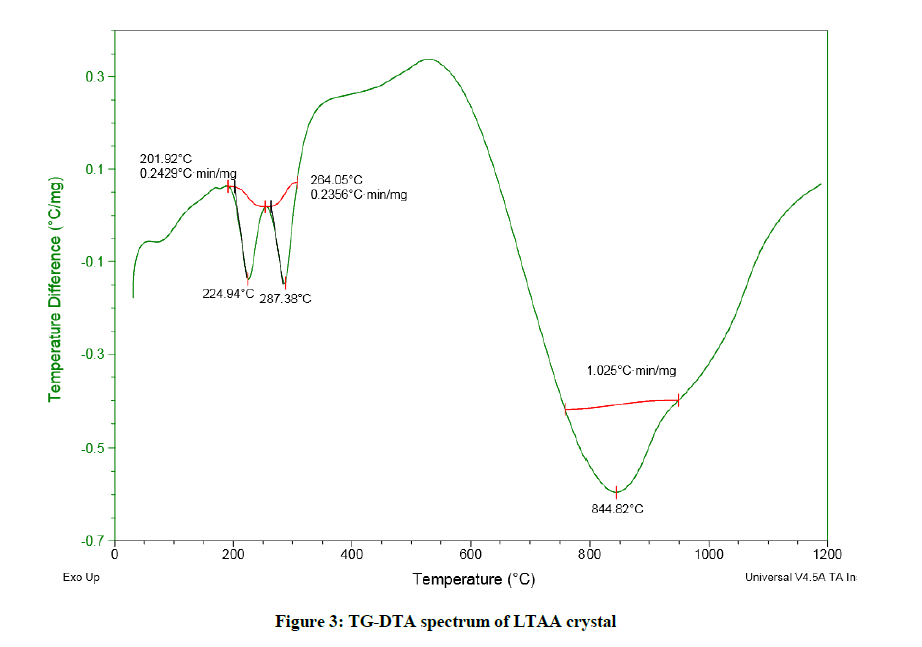 Kurtz and Perry powder technique was used to confirm the nonlinear optical (NLO) property of LTAA single crystal. A wavelength of 1064 nm with pulse width 8 ns Q - switched Nd: YAG laser source emitting was used to illuminate the sample. The second harmonic generation property of the grown crystal is confirmed with emission of green. The input energy incident on the sample was 0.70 mJ / pulse and the corresponding output was measured as 8.82 mJ. This output was compared with the output (8.94 mJ) obtained from KDP. The result shows that ammonium acetate increases the second harmonic generation efficiency of L-Threonine and is found to be 0.986 times that of KDP [19].

L–Threonine Ammonium Acetate (LTAA)-an organic non-linear optical single crystal has been successfully grown at room temperature by slow evaporation method. Powder X-Ray diffraction studies confirm the crystalline nature of the grown crystal. The single crystal X-ray diffraction depicts that grown crystal belongs to tetragonal system with space group C2. The various functional groups present in LTAA have been identified by Fourier Transform Infrared spectroscopy (FTIR) analysis. The thermal stability of the grown material is 200ºC which establishes its suitability to with stand the high temperature for laser experiments. The SHG efficiency of the grown crystal is found to be 0.986 times lesser that of the reference material KDP. Thus all the above results predict that LTAA crystal can be used as a potential candidate for non-linear optical applications.