The corrosion inhibition of mild steel in 0.5 M H2SO4 by the Pedalium murex leaves extract has been studied using weight loss methods, potentiodynamic polarization and electrochemical impedance spectroscopy techniques. The results show that the inhibition efficiency increases with the increase of the extract concentration. The adsorption of the extract molecules on the steel surface obeys Langmuir adsorption isotherm and occurs spontaneously. The activation energy as well as other thermodynamic parameters for the inhibition process were calculated. These thermodynamic parameters show strong interaction between inhibitor and mild steel surface.

Corrosion of metals is a spontaneous natural process. To control corrosion rate in cooling water systems many inhibitors are used. To avoid environmental toxicity, extract of natural products are used. For this many natural products are used by many researchers. The use of plant extracts as corrosion inhibitors has gained prominence as replacement for synthetic organic compounds. The plant natural products have been found to be effective, cheap and eco-friendly anticorrosion agents. Corrosion inhibitions of essential oils of Alpinia galanga were investigated on mild steel in hydrochloric acid solution using weight loss method by Ajeigbe et al., [1]. Sanaei et al. have used an effective green corrosion inhibitive hybrid pigment based on zinc acetate-Cichorium intybus L leaves extract to control corrosion of mild steel in aqueous chloride solutions [2]. A comparative study on the inhibitory action of some green inhibitors on the corrosion of mild steel in hydrochloric acid medium has been reported by Shyamala and Arulanantham [3]. The use of morinda citrifolia as a green corrosion inhibitor for low carbon steel in 3.5% NaCl solution has been by Kusumastuti, et al. [4]. Evaluation of Thymus vulgaris plant extract as an eco-friendly corrosion inhibitor for stainless steel 304 in acidic solution by means of electrochemical studies has been done by Ehsani et al. [5]. They have used density functional theory also, Rajendran et al. have used extracts of various plant materials such as henna leaves, curcumin, caffeine, spirulina to control of corrosion of metals [6-31].

The present work is undertaken to evaluate the inhibition efficiency of an aqueous extract of Pedalium murex leaves in controlling corrosion of mild steel in sulphuric acid medium. Weight loss method and electrochemical methods such as polarization study and AC impedance spectra have been used.

Extract of P. murex leaves is used as corrosion inhibitor in the present study. The leaves and flowers of P. murex are shown in Figure 1.

From the preliminary phytochemical screening may revealed the presence of saponins, steroids, phenols, flavonoids, alkaloids, tannins and glycosides in aqueous extract also.

An aqueous extract of P. murex was prepared by grinding 10 g of P. murex boiled with distilled water, filtering the suspending impurities, and making up to 100 ml. The extract was used as corrosion inhibitor in the present study.

For polarization cylindrical mild steel rod embedded in Teflon with an exposed area of 1 cm2 was used. The electrodes were polished with emery papers of 0/0, 2/0, 3/0, and 4/0 grades and degreased with acetone, dried and used.

Weight loss measurements were performed in 0.5 M H2SO4 with and without the presence of inhibitor of various concentrations. Inhibition efficiency was calculated using the formula From potentiodynamic polarization study corrosion current, corrosion potential and the Tafel slopes were derived. From AC impedance spectra, charge transfer resistance and double layer capacitance were calculated. The area of the counter electrode is much larger compared to the area of the working electrode. This will exert a uniform potential field on the working electrode. A solution quantity of 100 ml of the test solution was taken in a polarization cell. The working electrode was polished with 0/0, 1/0, 2/0, 3/0, and 4/0 emery papers successively and degreased with acetone. The working electrode, reference and auxiliary platinum electrodes were assembled and connections were made. Stirring was provided to the test solutions to avoid for the system the concentrations polarization before start of experiment. A time interval of about 15 minutes was given for the system to attain state and open circuit potential was recorded.

Adsorption isotherms are very important to determine the mechanism of organo-electrochemical reaction. It is important to know the mode of adsorption to understand this part of the study. Tables 3 and 4 give the various adsorption parameters.

The obtained values were fitted to Langmuir isotherm and the best fit to the experimental data was obtained. Langmuir adsorption isotherm is

The plot of log (Ө/1-Ө) vs. log C is a straight line as shown in Figure 2. Thus the Langmuir isotherm is valid for the inhibitor adsorption on the metal surface.

Figure 2: Langmuir adsorption isotherm for the inhibition of mild steel in 0.5 M H2SO4 by Pedalium murex

The free energy change adsorption of adsorption (ΔG0ads) of inhibitor on mild steel surfaces related to the constant of the adsorption according to equation.

From the results, values of ΔG0ads were found to be negative and were below the threshold value of -40 kJ/mol indicates the spontaneous adsorption of the ingredients of P. murex on the surface of mild steel and the mechanism of physical adsorption is applicable.

Table 5 and Figures 3-5 give the values of potentiodynamic parameter such as corrosion current (Icorr), corrosion potential (Ecorr) and the cathodic Tafel slopes (bc and ba) for the different concentrations of the green inhibitor under study. It can be seen that there is absorption of the inhibitor molecules on metal surface which is revealed by the decrease in corrosion current in presence of inhibitor.

Table 5: Corrosion parameters obtained from polarization curves for mild steel in 0.5 M H2SO4 in the presence and absence of inhibitor 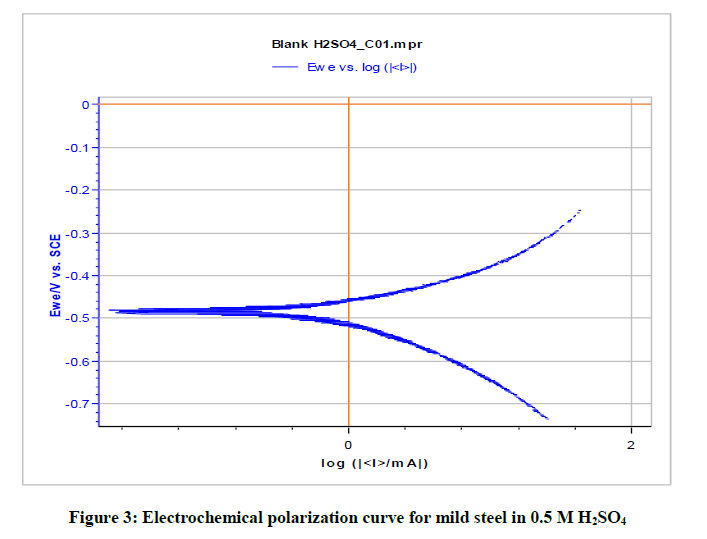 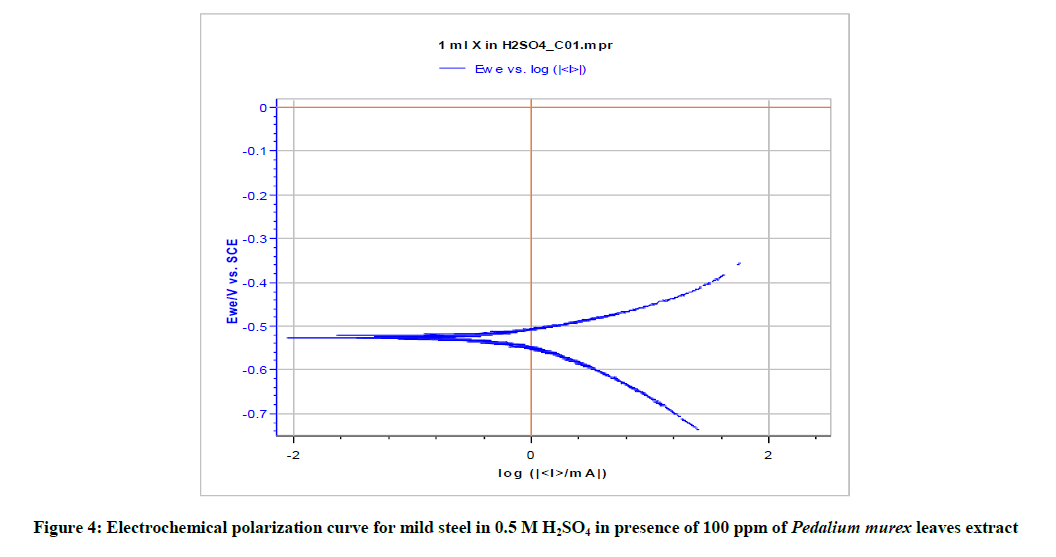 AC Impedance spectra have been used to investigate the formation of protective film on the metal surface during corrosion inhibition process. When there is corrosion inhibition, charge transfer resistance value increases and double layer capacitance decreases [38-43].

Table 6 and Figures 6-8 show the AC impedance curves of mild steel immersed in acid medium in presence of different inhibitor concentrations. The charge transfer resistance (Rt) value increases and double layer capacitance (Cdl) value decreases in presence of inhibitor concentrations. This implies the formation of protective film on the metal surface. It can be also seen from Table 7 that there is a close agreement between the values of inhibition efficiencies obtained from weight loss measurements, polarization and impedance studies. 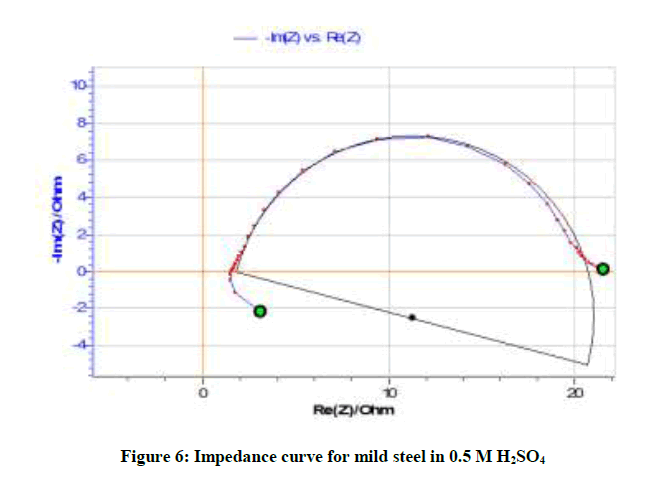 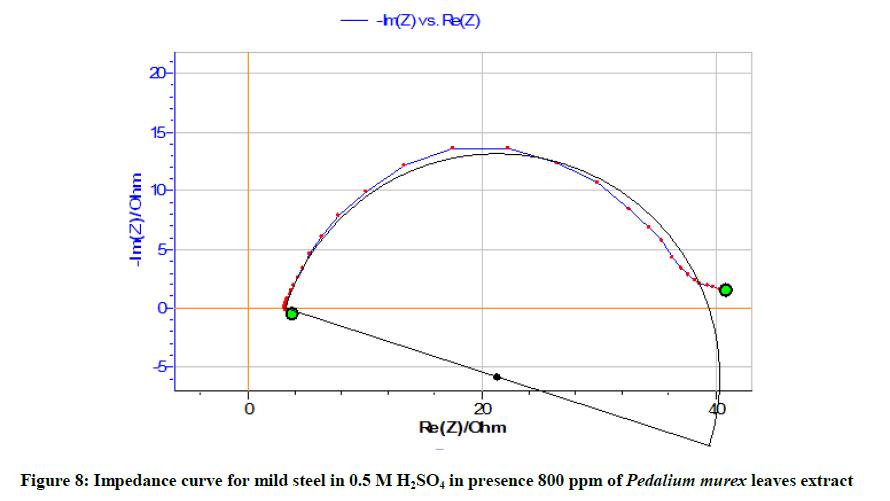 It is inferred from the Nyquisit plots that the process represent simple corrosion and corrosion resistance one. Semi circles are obtained. The equivalent circuit diagram for such a system is shown in Figure 9.

The inhibitive influence of P. murex L. extract on the corrosion of mild steel in 0.5 M H2SO4 was studied by weight loss method, polarization measurements and AC impedance spectra. The inhibition efficiency values determined by these techniques showed close agreement. The corrosion rate decreased with addition of P. murex L. extract. This is probably due to the progressing adsorption of the inhibitor molecules present in the extract on the metal surface. The maximum inhibition efficiency was found to be 90.47%.

1. The corrosion of mild steel in 0.5M H2SO4 solution is inhibited by the addition of P. murex L. extract.

2. The percentage of inhibition efficiency increases with increases of the inhibitor concentration.

4. The values obtained from the weight loss technique for the studied inhibitor fit into the Langmuir adsorption isotherm and the kinetic thermodynamic model. The values free energy for the adsorption process indicates that both physisorption and chemisorptions (comprehensive adsorption) of the P. murex L.extract studied on mild steel surface.

The authors are thankful to their managements for their help and encouragement.