Lung cancer is one of the most lethal worldwide and has a dismal prognosis. This disease has become important as a public health concern. Conventional radio-chemotherapies cause adverse side effects ranging from gastro-intestinal complications to bone marrow failure. The inadequate availability of efficient and safe treatment for the cancer intends the scientific researchers to focus the phytochemicals derived from medicinal plants. Lindernia madayiparense (Family: Linderniaceae) is widely distributed in the laterite hills, Kerala, India. Petroleum ether, ethyl acetate and ethanol extracts of L. madayiparense were prepared by continuous hot extraction method using Soxhlet apparatus. All the extracts were assessed for their in-vitro cytotoxic effect against Human lung carcinoma cell lines (A-549 cell line) by MTT assay. The maximum cytotoxic effect (90.96%) was observed by ethyl acetate extract of L. madayiparense at a concentration of 1000 μg/ml against the A-549 cell lines followed by pet ether extract and ethanol extract. The CTC50 value for ethyl acetate extract of L. madayiparense was found to be 594.81 μg/ml.

Cancer is the leading cause of death, and the prevalence of cancer continues to go up even though advances in earlier diagnosis and clinical intervention. Chemotherapy is one of the commonly-used strategies for the treatment of cancer. Other standard cancer therapies involved is surgery to remove the major tumor masses and subsequent radiotherapy to kill potential cancer cells present remaining and to prevent cancer recurrence [1]. But the lack of specificity is the main drawback of these conventional radio-chemotherapies which cannot discriminate cancer cells from normal cells, resulting in the substantial death of normal cells, and causes adverse side effects ranging from gastro-intestinal complications such as nausea, vomiting, appetite loss and ulceration, mucositis, necrosis to bone marrow failure [2]. Moreover, they complicate the therapies and thereby affect the prognosis and survival of cancer patient. It may affect the survival and quality of the life of the cancer patients. Therefore, the ideal anticancer therapeutics should exclusively target cancer cells while sparing normal cells.

Plant-derived drugs are preferred for health care, prevention and the treatment of various diseases and ailments as they are natural and readily available. They can be easily administered orally as part of patient’s dietary intake. Phytochemicals and their derivatives have a key role for the development of anticancer drugs. Also, being naturally derived compounds from plants are generally more tolerated and non-toxic to normal human cells [5].

India is one of the countries with rich biodiversity and massive treasure of herbal plants. Many indigenous systems such as Ayurveda, Yoga and Siddha are more prominent and prevailing in India from decades [6]. Consequently, lot of researches are conducting by experimental studies to demonstrate the epidemiological evidence of some plants as a whole, their parts or identified ingredients with specific biological properties which have substantial protective effects on human carcinogenesis. The use of medicinal herbs is still a tradition adopt by ethnic communities who are living in undulating plains and at foothills of dense forest and some of the traditional medical practitioner [7].

Lindernia madayiparense (Family: Linderniaceae) is a plant discovered first from the laterite hills, Madayipara, Kannur District, Northern Kerala, India. The Plant is used by the tribal inhabitants and local villagers for therapeutic purposes since long time [8]. But there is no scientific evidence for the pharmacological effects of this plant. Therefore, a detailed phytopharmacological study is warranted to explore the major active compounds and related bioactivities of this plant. Hence, the present study was undertaken for first time to explore the in-vitro cytotoxic effect of the extracts of the plant, L. madayiparense against human lung cancer cell lines (A-549 cell line).

Collection and identification of plant materials

Various extracts of Linderina madayiparense were prepared by continuous hot extraction method using Soxhlet apparatus [9]. The whole plant, Linderina madayiparense was washed thoroughly with distilled water and dried under air-shade and pulverized mechanically into coarse powder. The coarse powder (1000 g) has been successively extracted with three different solvents by changing the solvent polarity from non-polar to polar solvents such as petroleum ether, ethyl acetate and ethanol respectively. At the end of each successive extraction, the mixture was collected and concentrated using rotary vacuum evaporator under reduced pressure to remove the excessive solvents. All the extracts obtained were freeze dried to get an absolute extracts and stored properly and preserved in 8ºC until further use. The % yield of all the extracts was calculated.

The various extracts of Linderina madayiparense were subjected for preliminary qualitative analysis to identify the presence of phytochemical constituents such as alkaloids, carbohydrates, glycosides, flavonoids, steriods, triterpenoids, phenols, proteins, tannins etc. as per the standard methods [10]. The presence and absence of the secondary metabolites in the extracts was noted in Table 1. 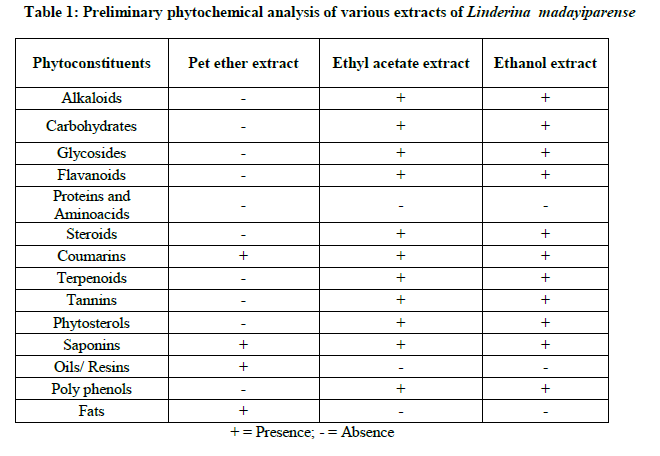 Stock cells of A-549 cell line were cultured in DMEM and supplemented with 10% inactivated FBS, penicillin (100 IU/ml), streptomycin (100 μg/ml) and amphotericin B (5 μg/ml) in a humidified atmosphere of 5% CO2 at 37°C until confluent. The cells were dissociated with TPVG solution (0.2% trypsin, 0.02% EDTA, 0.05% glucose in PBS). 25 cm2 culture flasks were used to grow the stock cultures and all experiments were carried out in 96 microtitre plates (Tarsons India Pvt. Ltd., Kolkata, India).

Each weighed pet ether, ethyl acetate and ethanol extracts were separately dissolved in distilled DMSO and the volume was made up with DMEM supplemented with 2% inactivated FBS to obtain a stock solution of 1000 μg/ml concentration and sterilized by filtration. From this stock solution, four different lower dilutions (500, 250, 125 and 62.5 μg/ml) were prepared [11,12].

The monolayer cell culture was trypsinized and the cell count was adjusted to 1.0 × 105 cells/ml using DMEM containing 10% FBS. 0.1 ml of the diluted cell suspension (approximately 10,000 cells) was added to each well of the 96 well microtitre plates. After 24 h, when a partial monolayer was formed, the supernatant was flicked off and washed the monolayer once with medium. To this, 100 μl of different test concentrations of pet ether, ethyl acetate and ethanol extracts of L. madayiparense were added respectively on to the partial monolayer in microtitre plates. The plates were then incubated at 37ºC for 3 days in 5% CO2 atmosphere, and microscopic examination was carried out and observations were noted every 24 h interval. After 72 h, the test substance in the wells was discarded and 50 μl of MTT in PBS was added to each well. The plates were gently shaken and incubated for 3 h at 37ºC in 5% CO2 atmosphere. The supernatant was removed and 100 μl of propanol was added. All the plates were gently shaken to solubilize the formed formazan. Then the absorbance was measured using a microplate reader at a wavelength of 540 nm using UV-visible spectrophotometer. The percentage growth inhibition was calculated using the following formula and recorded (Table 2). The concentration of the extract needed to inhibit the cell growth by 50% (CTC50 value) was determined from the dose-response curve (Figure 1) for the cell line [11-14]. 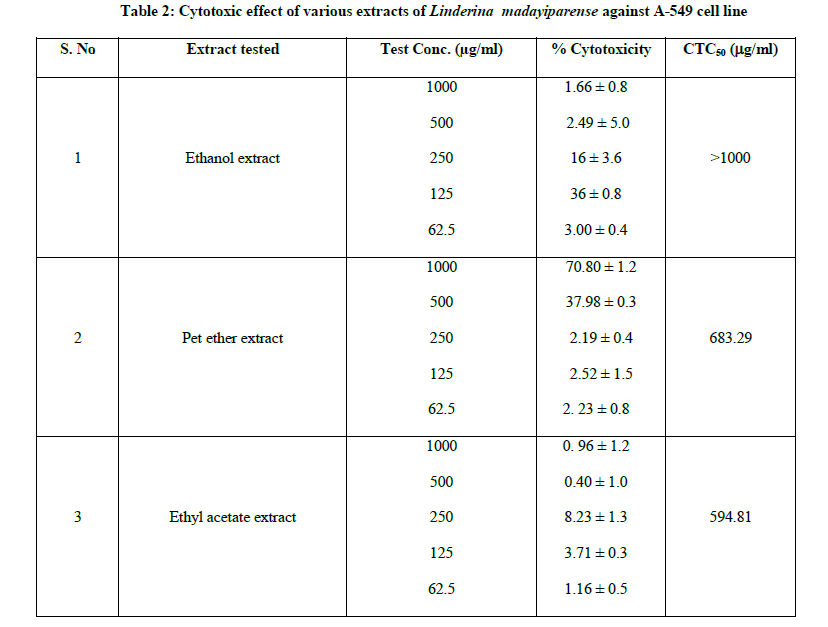 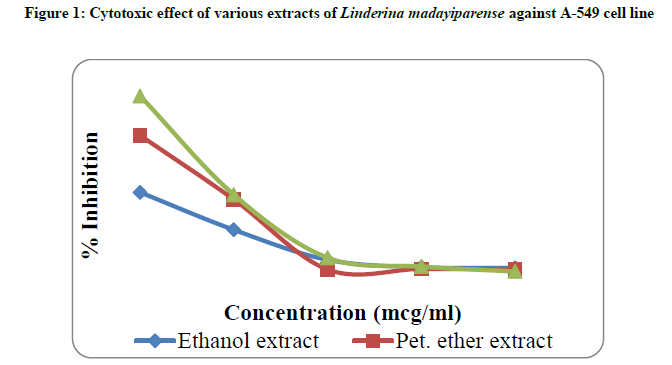 Phytochemical tests revealed that the presence of coumarins and saponins in all the three extracts while the absence of proteins and amino acids were found in these all extracts. Oils and fats were oresent only in pet ether extracts. Alkaloids, carbohydrates and glycosides, flavonoids, steroids, terpenoids, tannins, and phytosterols are present in both ethyl acetate and ethanol extracts of L. madayiparense (Table 1).

Pet ether, ethyl acetate and ethanol extracts of Linderina madayiparense were obtained by continuous hot extraction method using Soxhlet extractor. The type of solvents used for the extraction procedure plays a key role to obtain a maximum quantity of extract because every phytochemical constituent has its own solubility competency in different solvent [15]. Therefore, the order of increasing polarity of solvents used in the present study is pet ether, ethyl acetate and ethanol.

The in-vitro cytotoxic effect of the various extracts of Linderina madayiparense was determined by 3-(4,5-dimethyl thiazol-2-yl)- 2-4-diphenyl tetrazolium bromide (MTT) assay. This colorimetric assay is based on the capacity of the enzyme, mitochondria succinate dehydrogenase in living cells to reduce the yellow water soluble substrate, 3-(4, 5-dimethyl thiazol- 2-yl)-2,5-diphenyl tetrazolium bromide (MTT) into an insoluble, colored formazan product which is measured spectrophotometrically. The ability of the cells to survive a toxic insult is the basis of most cytotoxic assays. This assay is based on the assumption that dead cells or their products do not reduce tetrazolium. The assay depends on both the mitochondrial activity per cell and number of cells present. The cleavage of 3-(4, 5 dimethyl thiazole-2yl)-2, 5-diphenyl tetrazolium bromide (MTT) to a blue formazan derivative by living cells is clearly a very effective principle on which the assay is based. The reduction of MTT can only take place in metabolically active cells and the level of activity is a measure of the viability of the cells. The amount of cells was found to be proportional to the extent of formazan production by the cells used. MTT reduction as a cell viability measurement is now extensively chosen as the most advantageous end point to assess the cytotoxicity [16,17].

From the present findings, it can be concluded that the plant, Linderina madayiparense showed cytotoxic effect against Human lung carcinoma cell lines (A-549 cell line). Further investigations are necessary to assess the cytotoxic effect on animal models and also to identify the secondary metabolites which might be responsible for the cytotoxic activity of this plant. The isolation and characterization of the specific bioactive principle is in process to exploit the potential therapeutic uses of the plant, Linderina madayiparense.

The authors are grateful to the Management and Department of Pharmacy, Annamalai University for their continuous encouragement and providing necessary facilities. Authors are also thankful to Mr. P. Biju, Assistant Professor, Government College, Kasaragod, Kerala for his support during the collection and identification of the selected plant.