The kinetics and mechanism of oxidation of vanillin by N-Bromosuccinimide (NBS) was studied in acidic medium. The reaction exhibited a first order dependence with respect to NBS and fractional order with respect to vanillin and negative fractional order with respect to [H +]. Varying ionic strength has no significant effect on the oxidation rate. The final product of the oxidation was identified as vanillic acid by both spectral and chemical analysis. The rate law explaining all the kinetic results has been evaluated. The activation parameters of the reaction have been evaluated.

Vanillin (4-hydroxy-3-methoxybenzaldehyde), commercially called p-vanillin (Van) occurs [1] in nature as a glucoside, which hydrolyses to vanillin and sugar. It is the major flavour component of natural vanilla. Van is a naturally occurring compound found in vanilla beans and may also be released to the environment as a byproduct in the decay process of plant material. If released to air, the vapor pressure of 0.01599 Pa at 298 K indicates Van will exist solely as a vapor in the ambient atmosphere. Vanillin displays antioxidant and antimicrobial properties and it may be used as a food preservative [2] and is also useful in the synthesis of drugs like Aldomet, L-Dopa [3] and trimethoprim. It is also used in the preparation of perfume, metal-plating industries and as a catalyst in the polymerization of methyl methacrylate [4]. It is capable of undergoing reactions of both phenolic, aldehydic group and aromatic nucleus. In comparison with most other aldehydes, vanillin is notable for its stability. Van shows up in all sorts of products-in foods and flavoring, obviously, but also in fragrances, cosmetics and aromatherapy.

N-bromosuccinimide (NBS) is a source of positive halogen and this reagent has been exploited as oxidant for a variety of substrates in both acidic and alkaline medium [13]. The nature of active oxidizing species and the mechanism depends on the nature of the halogen atom, the groups attached to the nitrogen and the reaction condition. The species responsible for such oxidizing character may be different depending on the pH of the medium. It had found widespread application in organic transformations, synthesis of drugs, pharmaceuticals and agrochemicals.

A solution of vanillin (Sigma-Aldrich) was prepared by dissolving an appropriate amount of recrystallized sample in double distilled water. Purity of vanillin was checked by comparing the melting temperature (355 K) with literature data (355-356 K). The required concentration of vanillin was obtained from its stock solution. N-Bromosuccinimide, H2SO4 and Hg(OAc)2 (Merck) were of analytical reagent grade and were used as received. Acetic acid (BDH) was purified by refluxing with chromic acid and acetic anhydride for 6 h and then distilled. Other solutions were prepared with either double distilled water or purified acetic acid and were standardized by known methods. A Shimadzu multipurpose recording double beam UV-Visible spectrophotometer equipped with a temperature controller was used for absorption studies. Separation and identification of organic intermediates in the reaction were performed using high Performance Liquid Chromatography (HPLC). The experiments were performed with Shimadzu equipment using an ion-exchange column at 45°C and a UV-detector working at 220 nm. The intermediates and the products were identified from their retention time (tr).

A thermostatic water bath was used to maintain the desired temperature within ± 0.1°C. The reaction mixture containing Van, Hg(OAc)2, H2SO4, was thermally equilibrated for 1 h at the desired temperature under subdued light. The reaction was initiated by the addition of temperature equilibrated NBS solution of requisite concentration the total volume of the reaction mixture was 30 ml of aliquots of the reaction mixture was pipetted out at different intervals and quenched with 5% potassium iodide solution. The progress of reaction was iodometrically monitored by estimating the unreacted NBS. However, before adopting iodometric method it was ensured that the presence of Van in the quenching solution of potassium iodide did not change the NBS titer value. All the reactions were carried out under the condition using ten-fold excess of Van over NBS at constant temperature. The pseudo first order rate constant (k, s–1) were computed from the linear plot of log [NBS]t against time up to 90%completion of the reaction and the rate constants were reproducible within ± 5%. Rate constant did not alter in a nitrogen atmosphere and all the rate constants reported in this paper were obtained without nitrogen. Freshly prepared solutions were used in each kinetic run to avoid any possible side reactions.

The stoichiometry of the reaction was determined by equilibrating different sets of reaction mixtures containing an excess of [NBS] over [Vanillin] at 40°C for 24 h, keeping all other reagents constant in an inert atmosphere. Estimating of unconsumed NBS concentration revealed the consumption ratio of substrate to oxidant as 1:1.

The main oxidation product, vanillic acid, was isolated and the product was identified by spot tests [15]. To a small portion of product in a test tube, addition of sodium carbonate and formaldehyde resulted in the formation of white precipitate along with the liberation of CO2, indicated the presence of vanillic acid [16]. The nature of the vanillic acid was confirmed by the IR spectrum, which showed a carbonyl (>C=O) stretch at 1744 cm–1 and an O–H stretching at 3412.31 cm–1 for a carboxylic acid. A broad intense peak at 1650.80 cm–1 is retained in the product due to absorption by the –OCH3 group. It was further confirmed by its melting temperature 479 K (literature melting temperature 479-481 K). It was observed that vanillic acid did not undergo further oxidation under the present kinetic conditions. The oxidation product of vanillin was identified as vanillic acid by both spectral and chemical analyses as reported [17,18]. Similar oxidation product of vanillin has been also reported [19].

Mercury (II) can act as a homogeneous catalyst, co-catalyst and oxidant [20]. In the present study, mercury (II) acetate has been used as a scavenger to eliminate Br– ions formed in the course as HgBr2 or HgBr42–. In the absence of mercuric acetate, the bromine that is produced thus sets another parallel oxidation and creates complication in the N-bromosuccinimide oxidation of 5-oxo acids. The added mercuric acetate over a wide concentration range (0.001-0.01 mol.dm–3) had no effect on the rate of reaction. In order to keep back all the Br– ions formed, an optimum concentration (0.005 mol.dm–3) of mercuric acetate was employed. Hence, the added Hg(II) ion is acting as a bromide ion scavenger in the reaction without perturbing the kinetic results.

Kinetic results and effect of concentration of reactants

The effect of [NBS] on the rate of the reaction was studied by varying the concentration in the range of 0.0005-0.006 mol.dm-3 at fixed concentrations of acid, Hg(II) and when [Vanillin] is in 10-fold excess over [NBS]. The disappearance rate of [NBS] followed first-order rate law which is evident from the obtained linear plots of log [NBS]t versus time (R2 ≥ 0.99). Further, the pseudo-first order rate constant (k, s–1), evaluated from the slopes of such plots remained unchanged (Table 1) (Figures 1-4) with the variation of [NBS]ο, confirming the first order dependence of the rate on [NBS]ο. Figure 2: Plot of 1/k against 1/[Vanillin]. Experimental conditions as in Table 1 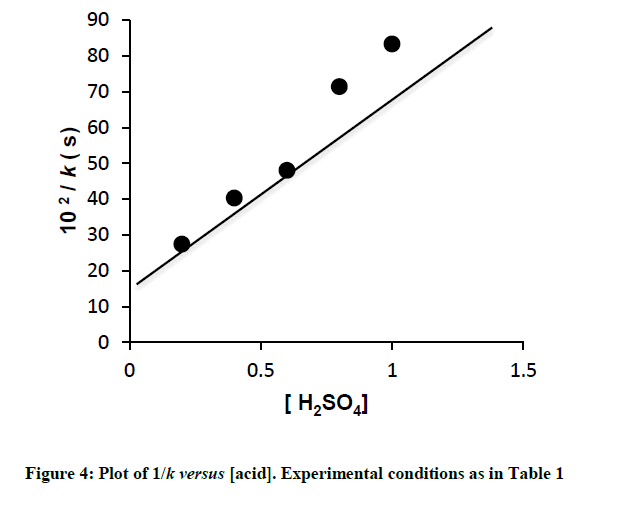 Figure 4: Plot of 1/k versus [acid]. Experimental conditions as in Table 1

The effect of [Vanillin] on the reaction rate was studied in the concentration range of 0.01-0.04 mol.dm–3 at constant concentration of oxidant, acid and mercuric acetate (Table 1) and the value of observed rate constant, k, s–1 increased with an increase in vanillin concentration. The plot of log k versus log [Vanillin] was linear (R2 ≥ 0.99) with slope less than unity suggesting the fractional order dependence of rate on [Vanillin].

The effect of [acid] on the oxidation rate was examined by carrying kinetic runs at various hydrogen ion concentrations in the range 0.2-1.0 mol.dm–3 while, other variables were kept constant. Increasing the acid concentration was found to decrease the oxidation rate (Table 1). A plot of log k versus log [H +] was linear with negative slope confirming the inverse fractional order dependence of the reaction with respect to [H +]. In acidic media, NBS is known to exist in Br+ Br2, HOBr, H2O+Br and > N+ HBr [21-23]. The observed kinetic data show negligible effect of [Succinimide] on the rate of oxidation of vanillin, which excludes the possibility of HOBr or H2O+Br being the reactive species [24]. The equilibria [25,26] that exists in between NBS, Br+ or N+HBr is represented by Equitation’s 1 and 2.

The above equilibrium clearly shows that NBS, Br+ or N+HBr is the reactive species. The involvement of Br+ in the rate-determining step is ruled out as there is no influence of added salt, KBr on the reaction rate. On the other hand, if N+HBr is taken as the reactive species of NBS, it will lead to a positive effect of [H +] on the rate of oxidation, which was not observed during the reaction (Table 1). Thus, out of these species i.e., NBS, Br+, N+HBr, HOBr or H2O+Br the NBS species remains as the reactive species of NBS for the oxidation of vanillin in acidic medium. Based on the obtained experimental observations a plausible mechanism has been proposed as is represented by Scheme 1. The mechanistic pathway is demonstrated by (i) The formation of the active species of NBS (ii) The complex formation between NBS and vanillin (iii) The decomposition of the complex as the rate-determining step as seen in Scheme 1 which is in accordance with the observed stoichiometry. Based on this reactive species, a rate law has been derived which will explain the inverse fractional order in [H +] and absence of [NHS] effect on the reaction. Scheme 1: Mechanistic pathway of oxidation of vanillin by N-Bromosuccinimide

On the basis of the equilibrium step in Scheme 1:

In terms of total NBS concentration, rate can be represented as:

Since, NBS (N-Bromosuccinimide) is present in complexed and uncomplexed forms, at any time the total concentration of NBS can be given as Equitation 9.

The rate law in terms of total bromate concentration can be given as:

The rate law (Equation 12) is in accordance with the observed experimental results, wherein a first-order dependence on [NBS], and the order less than unity each on [vanillin] and inverse fractional order in [H +] was observed.

The rate law is in accordance with the observed experimental results, wherein the order is fractional in [Vanillin], inverse fractional in [acid] and unity in [NBS]. It is pertinent to mention here that the oxidation did not occur without the presence of mineral acid, and proceeded smoothly in the presence of added [H2SO4]. According to Equation 13 other conditions being constant, the plots of 1/k versus 1/[Vanillin] (Figure 2) and 1/k versus [H +] (Figure 4) should be linear with a definite intercept. The linearity of the plot 1/k versus 1/[Vanillin] with a definite intercept is also an evidence for the complex formation between NBS and vanillin. Such an observation supports the validity of the rate law. (Equation 13) and hence proposed reaction mechanism (Scheme 1).

The kinetics and mechanism of oxidation of vanillin by N-Bromosuccinimide (NBS) has been investigated in acidic medium. NBS is suggested to be the kinetically active species of the oxidant which take part in the oxidation reaction. The final oxidation product of vanillin was identified as vanillic acid. Thermodynamic parameters were evaluated and discussed.

The authors are thankful for the Department of Chemistry, University College of Science, Saifabad, Osmania University, Hyderabad for providing facilities for carrying out this work. 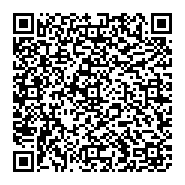