The reactions of O,O-diethylchlorophosphate or O,O-diethylchlorothiophosphate with 1,4-phthalazine-bis(hydrazones), derived by the condensation of 1,4-dihydrazinophthalazine dihydrochloride monohydrate and 2-hydroxy benzaldehyde/4-hydroxy benzaldehyde/2- hydroxyacetophenone/4-hydroxyacetophenone, have been studied and a variety of organophosphorus derivatives have been obtained. The derivatives have been characterized on the basis of analyses and spectral (IR, 1H NMR) data and tested for their antifungal efficacy against colletotrichum falcatum, Fusarium oxysporum and Curvularia pallescens (all sugarcane pathogens). These compounds show promising results in inhibiting the mycelial growth of all the test fungi at 1000 ppm. Out of these, the most active compound is 0,0-diethylthiophosphate derivative containing 1,4-phthalazine-bis(2-hydroxyacetophenone) hydrazone(VII),which shows activity of 70.2% at 1000 ppm concentration against C.pallescence.

Phosphorus plays a key role in biological systems; it is involved in number of metabolic reactions, enzymatic processes, photosynthesis, nucleic acid helices and in several biochemical reactions, concerned with the transport and storage of energy [1]. Organic phosphorus compounds are one of the most important groups of modern pesticides [2-4]. The widespread use of these compounds is due to their relatively low stability and rapid metabolic breakdown in plants, in animal organism, in soil, and in other component of the environment with the formation of products that are safe for human beings and domestic animals. Another important feature of these compounds is the high selectivity of their action. The discovery of the mechanism of action of organophosphorus compounds make it possible to develop the fundamental principles of the directed synthesis of new substances and to establish the cause of their selective action on an organism [2]. A few recent reports [4-7] from our laboratory have shown that on the basis of suitable logic, organic molecules incorporating phosphorus may be designed such that they may be less dangerous in use without losing their value as effective pesticides. Studies on organophosphorus derivatives could constitute new and promising field of application in the national economy. Phthalazin-is a diazaheterobicycle found in a wide variety of synthetic molecules relevant to several branches of chemistry, including medicinal chemistry [8].The present study, therefore, was undertaken to evaluate the antifungal efficacy of some newly synthesized organophosphorus compounds against various important fungal pathogens of sugarcane.

The structures of 1,4-phthalazine-bis(hydrazones) used for the present study are shown below: 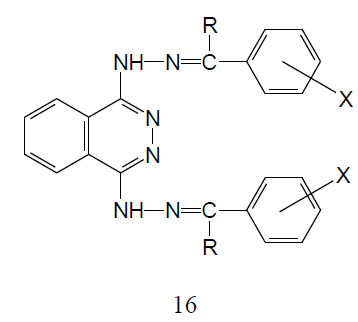 The reactions of O,O-diethylchlorophosphate or thiophosphate were carried out under inert atmosphere and anhydrous condition. Special precautions were taken to exclude moisture from the apparatus and chemicals as the starting materials O,O-diethyl chlorophosphate/ thiophosphate and reactions were susceptible to hydrolysis. Glass apparatus with interchangeable joints were used throughout the work. The solvents were purified and dried using the method described in literature [9]. O,O-diethyl chlorophosphate and O,O-diethylchlorothiophosphate were prepared according to the reported method [10]. Schiff bases were prepared as reported [11]. All reactions were carried out in hood. The details of analysis and physical measurements were the same as reported earlier [4].

For antifungal activity, all of the compounds with three concentrations (10, 100 and 1000 ppm) were tested against all of the test fungi by the food-poison technique [12]. Oat meal-agar medium was used for culturing the test fungi. In controls, the same amount of medium containing the requisite amount of solvent was poured in place of test chemicals. Each treatment was reported three times and the inhibition was recorded relative to percent mycelial inhibition calculated by using the formula [(dc-dt)/dc]100, where dc is the average diameters of the colony of the control and dt is the average diameter of the mycelial colony of the treatment sets.

O,O-Diethyl chlorophosphate/ thiophosphate was added to a solution of the appropriate 1,4-phthalazine-bis(hydrazones) in 2:1 molar ratio, respectively, in methanol ( ca. 40 cm3) in the presence of pyridine (5 cm3), and the reaction mixture was refluxed for 10-18h. The solid product was separated out which filtered and crystallized from acetone [13,14].

The reactions of O,O-diethylchlorophosphate/O,O-diethylchlorothiophosphate with 1,4-phthalazine-bis(hydrazones) derived by the condensation of 1,4-dihydrazino phthalazine dihydrochloride monohydrate with 2-hydroxybenzaldehyde/ 4-hydroxybenzaldehyde/2-hydroxyacetophenone/ 4-hydroxy- acetophenone, have been carried out in ethanol in presence of pyridine and a variety of organophosphorus derivatives have been isolated according to Schemes 1-4. 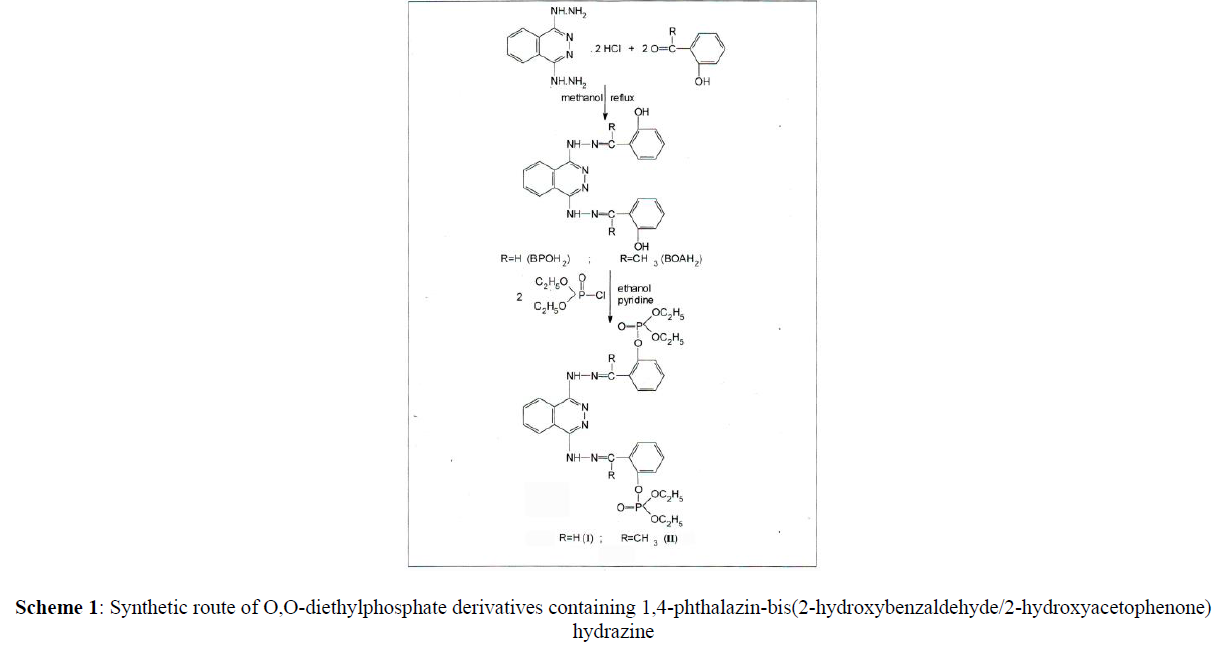 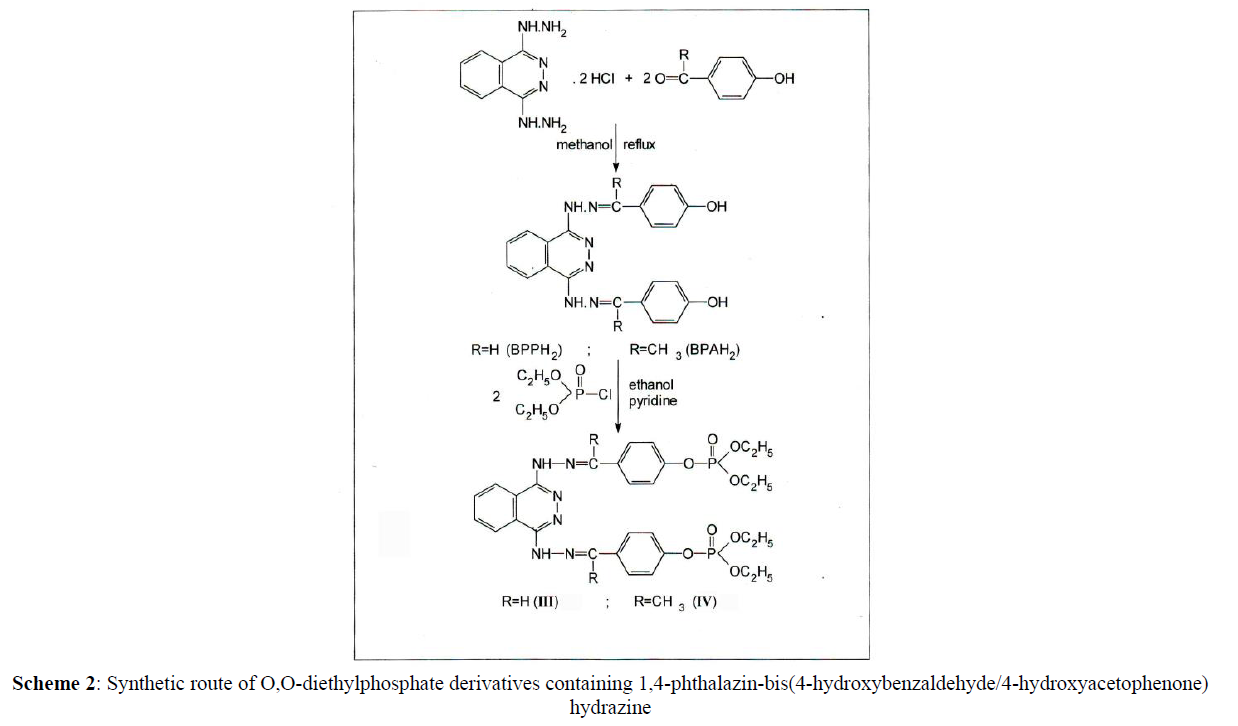 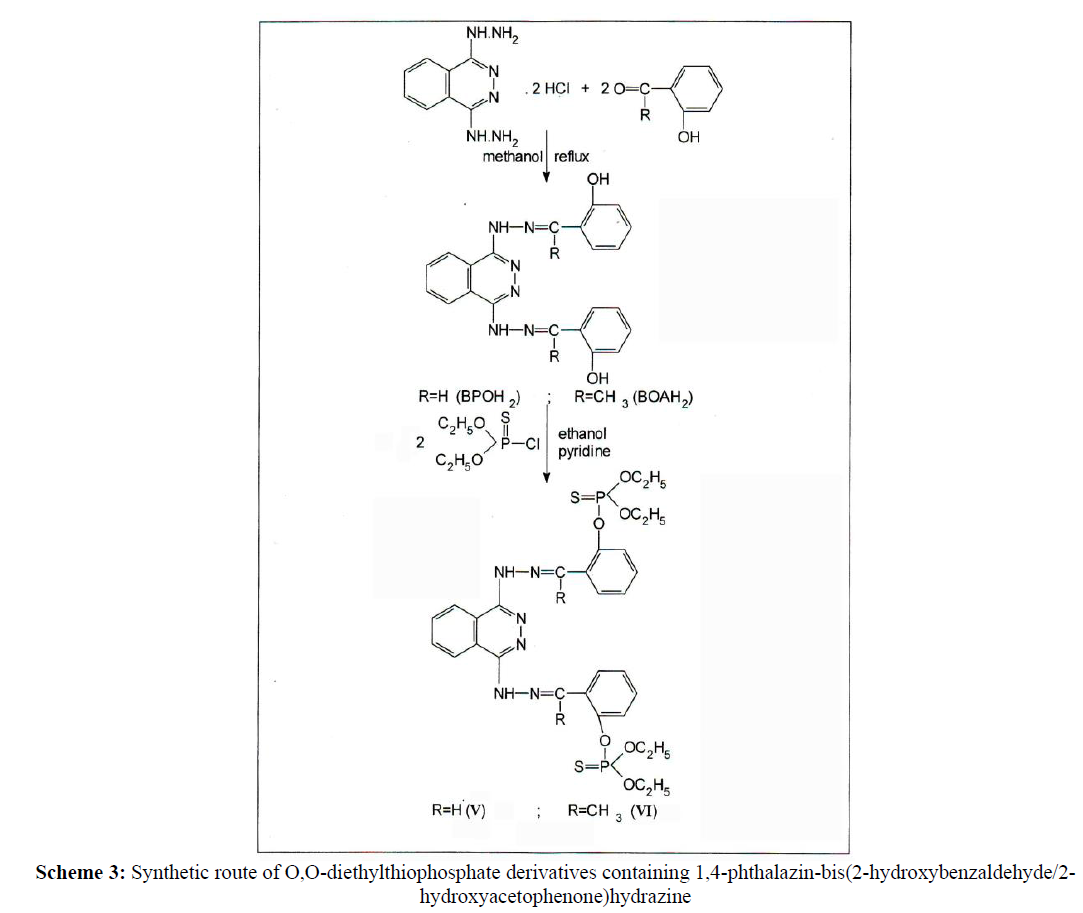 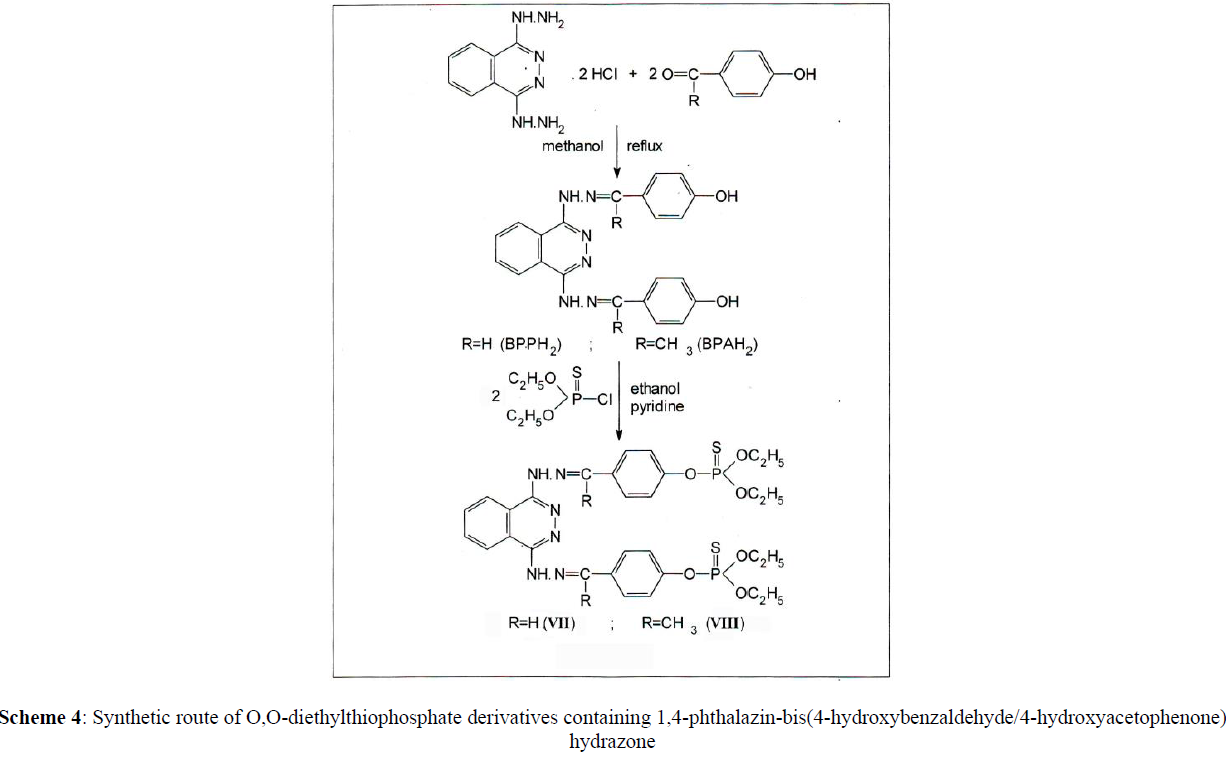 The methods used for the preparation and isolation of these compounds gave materials of goods purity as supported by their analysis and TLC. The elemental analysis and physical properties of the organophosphorus derivatives are given in Table 1.The organophosphorus derivatives are found to be soluble in ethanol acetone, chloroform, dimethylformamide and dimethylsulfoxide. These compounds melt in the temperature range 152-232ºC. The compounds are stable in air.

The infrared spectral bands of 1,4-phthalazin-bis(hydrazones) and their corresponding organophosphorus derivatives are given in Table 2. The spectra of hydrazones show strong bands at ca. 3340–3375 cm-1 due to free hydroxy groups [16]. However, in organophosphorus derivatives, this band disappears indicating the formation of bond between phosphorus and oxygen. This is confirmed by the appearance of band at ca. 1140 cm-1 assignable [4, 15] to (P-O-C) (arom.) vibration.

The free hydrazones and their corresponding organophosphorus derivatives also show bands at ca. 1560 cm-1, 1510 cm-1 and 800 cm-1 which are assignable(17) to (C=N) ring, skeletal vibrations of phthalazine ring and C-H deformation band of phthalazine hydrazones. The above observations indicate that possibly the bonding in organophosphorus derivatives is through phenolic oxygen atoms of hydrazones.

(a) The signal due to secondary amino group protons appears at 4.40 in the spectra of phthalazine hydrazones and their corresponding organophosphorus derivatives.

(b) The signal due to –OH proton appears at ca. 9.8 in the spectra of hydrazones, which disappears, in the corresponding organophosphorus derivatives indicating the deprotonation of phenolic oxygen.

(d) Signals at ca.  7.50-7.95 appear in the spectra of all derivatives due to phthalazine ring protons.

Sugarcane, a major source of sugar and important cash crop, is extensively grown worldwide. Sugarcane is known to have fungal, bacterial, viral and phytoplasm pathogens that are responsible for considerable economic losses [14]. Among fungi Colletotrichum falcatum (red rot) and Fusarium oxysporum (wilt) are the most important pathogens that may be transmitted by planting infected setts. Curvularia pallescens is the important foliar pathogen of sugarcane, sometimes causing enormous losses to the sugar industry.

The organophosphorus derivatives containing 1,4-phthalazine-bis(hydrazones) are found to be very effective (Table 4). The most active compound in this series is O,O-diethylthiophosphate derivative containing 1,4-phthalazine-bis(2-hydroxyacetophenone) hydrazone (VII), which shows activity of 70.2% at 1000 ppm concentration against C. pallesence [17].

1] There is significant alteration in the antifungal activity with the change in the nature of organic group attached to O,O-diethylphosphate/ thiophosphate moiety.

3] The activity decreases on dilution.