Recently it is observed that everyone is becoming health conscious and looking for natural food material without chemical preservatives for healthy and secured lifestyle. By increasing consumption of precooked food, prone to temperature abuse and the import of raw foods from developing countries are the very common ways and also the main causes of the current situation. Bio-preservation refers to extended shelf life and enhanced safety of foods by using microorganisms and their metabolites. Fermentation is one of the most ancient and most important routine technique.

The rate of fermentation increases with concentration is closely correlated to the total bacterial charge. Fermentation is a relatively efficient, low energy preservation process, which increases the shelf life and decreases the need for refrigeration or other forms of food preservation technology. Currently, fermented food materials are becoming famous and popular as well (60% of the diet in industrialized countries), to assure the homogeneity, quality, and safety of products, they are produced by the intentional application in raw foods in different microbial systems (starter/protective cultures) lactic acid fermentation is caused by some of the fungi and bacteria. The lactic acid curdles the milk and then it separates to form the curd which is used to produce cheese. The most important lactic acid producing bacteria is Lactobacillus. The bacteria like Leuconostoc mesenteroides, Pediococcus cerevisiae, Streptococcus lactis and Bifidobacterium bifidus also produce lactic acid as well [1-5].

During the fermentation process the organic matter is decomposed in absence of air, hence there is sort of an accumulation of reduction products, or incomplete oxidation products. Some of these products are have much importance to human being. The fermentation has been used for the manufacture of milk products on commercial scale. The formation of lactic acid is the beginning of industrial fermentation. Major antibiotics were also obtained from the fermentation processes. The microbiological production of vitamins is economically very important. The bacteria employed in fermentation require specific environment and food to ensure their metabolic activities. The concentration of food affects the formation of the products. For rapid fermentation the optimum temperature varies 50C to 400C. The pH also greatly influences the formation of lactic acid. The conditions can be controlled and optimized to encourage the multiplication of these organisms and then it’s functioning either directly or through the enzymes as well.

Milk is a dynamically balanced mixture of proteins, fats, carbohydrates, salts and water co-existing as emulsions, colloids, suspensions and true solutions. Milk products are prepared by alteration of these relationships either by removal of or by changing the ratio of or more of the components. In fermented milk, the actual chemical composition is changed by microbial action. A good deal of interest has been devoted to the investigation of fermentation of milk. It has got wide applications and great potential in dairy industry. In this paper we have tried to report the optimum temperature, pH, time, effect of kinds of pot (environment) used and the concentration of the cultures used. All parameters measured mentioned in this study supports each other and explains how the microbial activity can be controlled [6-12].

The received sample was filtered and then boiled for 5 minutes. Then it is allowed to cool naturally. Such samples are used for fermentation. The culture used for proper fermentation is one tenth by weight of the reactant. The temperature was recorded continuously during fermentation process by means of one tenth, 110°C thermometer. The temperature is controlled by using refrigerator. The temperature interval 100°C to 300°C was covered in four steps. The pH was measured by pH meter available in the laboratory with maximum accuracy of the various samples. The samples were analyzed by lactic acid measurement in the laboratory by titration against standardized 0.1 N NaOH. An exposure to light was given for analysis of effect of light on bacterial activity. Same experimental observations get recorded for ceramic, stainless steel, plastic pots, but earthen pot observations are quite expensive which correlatively sustain the atmospheric parameter and gives better yield.

The unorganized enzyme ferments are the active catalysts which bring about the chemical changes. Fermentation is microbial process carried out specifically with controlled conditions by researchers that produces useful products. The main features of the fermentation process can be understood graphically. Lactose is one of the best substrate for formation of micro-organisms. Even under the most hygienic condition in presence of micro-organisms the sweet taste of milk get changed to sour. As a result stringent and souring flavors were produced under suitable conditions of temperature and surrounding as well. The lactic acid bacterium propagates and the changes in souring may be observed excellent at 370C (Figure 1). The development of acid is measured at regular intervals. It is possible to plot the results graphically. In the beginning the lactic acid formation is slow, but it increases vigorously with the activity of micro-organisms. The actual time required for these changes depends upon the nature and the number of micro-organisms present and the temperature as well, it may take time from few hours or even days. The main change brought about by the bacteria is the conversions of lactose in to lactic acid. Lactic acid in the pure form has neither odor, nor the flavor of the sour milk. These are various by-products like carbon dioxide, acetyl methyl- carbinol, diacetyl and butyric acid among diacetyl and butyric acid has strong powerful odor (Tables 1-3) 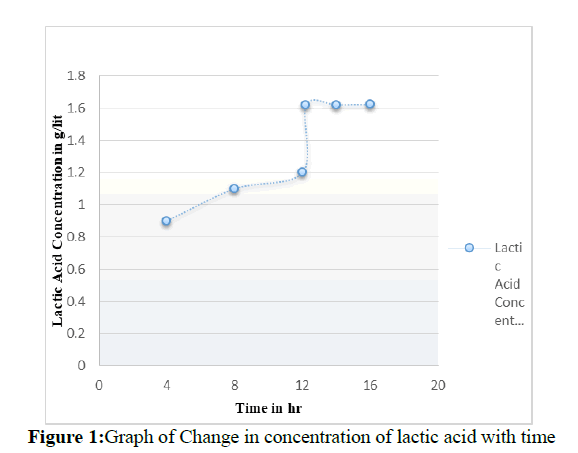 Figure 1: Graph of Change in concentration of lactic acid with time

Table 1: Table of change in concentration of lactic acid with Time

It is observed that, under appropriate conditions of pot, in a relatively short time a tremendous increase in the microbial activity is observed.

Lactic acid bacteria play very important role in many Asian fermented foods, especially in non-dairy fermented vegetable products. The probiotic functions of lactic acid bacteria in non-dairy fermented foods in Asia have not been fully investigated. L. mesenteroides present in kimchi, probably have probiotic effects. In fact, Koreans who travelled overseas for several days without kimchi often experienced uncomfortable stomach symptoms and poor digestion. More research is needed to identify the lactic acid bacteria in Asian fermented foods and their physiological functions in the human diet. Several studies were proved that micro-organisms and enzymes could be a practical way to reduce the concentrations of some contaminants and to avoid the toxic effects via bioremediation. This opens up wide possibilities of using such bio- technological means on a food industry. Further, more experiments like utilization of the strains in fermentation processes or using the enzyme preparations can exhibit excellent outcomes. The majority of experiments were carried out in model systems and in laboratory conditions. The control of degradation products and the effects of detoxification on nutritive and sensory properties is observed in every case as a decisive part of research and potential application.