Potential Prebiotic Properties by In vitro in Arrowroot Starch (Marantha arundinaceae L.) a Combination of Acidic, Enzymatic, and Physical Modification

Potential Prebiotic Properties by In vitro in Arrowroot Starch (Marantha arundinaceae L.) a Combination of Acidic, Enzymatic, and Physical Modification

Sales figures of prebiotic products used as ingredients, supplements, and food in global market in 2012 reached 16 billion USD [1]. Prebiotics sales in 2014 were estimated to be around 198 million USD [2]. Since the last five years, there has been significant increase in consumer demand to variations in types of probiotic products [1]. The rise of prebiotic market encourage food industry to innovate and assess new sources of prebiotic. Resistant starch is another potential prebiotic component besides oligosaccharides. Arrowroot starch structure greatly promotes the formation of RS 3 (retrograded starch), which is a potential source of prebiotic. Arrowroot starch’s prebiotic properties can be improved by increasing the level of its resistant starch. Retrogradation of starch by autoclaving-cooling cycles modification is one of the ways to increase the level of resistant [3]. The chance for retrograded starch to form is higher as the number of short chain fraction is increased [4]. The process of slow acid hydrolysis (lintnerization) by using HCl or by termination of branch α-1-6 bonds in amylopectin chain (debranching) or a combination of both in shortening the length of chain α-glucan decreases the Degree of Polymerization (DP). DP value of around 10-35 is the adequate value to raise the level of resistant starch [5]. Resistant starch properties are associated with the formation of crystallites in starch granules. HMT method enhances the formation of crystallites in starch granules, therefore increasing the level of resistant starch [6]. This study aimed to evaluate prebiotic properties of RS 3 in modified arrowroot starch from in vitro combination of acid, enzymatic, and physical modification and also to find the modification treatment with best RS 3 potential prebiotic properties result.

A total of 250.0 g of arrowroot starch was suspended in a solution of HCl (ratio 1: 1) with 2.2 N concentrations [3]. Starch suspension was incubated in 35ºC for 2 hrs with continuous stirring performed every 5-10 min. Arrowroot starch suspension which had undergone acid hydrolysis treatment was neutralized with sodium hydroxide (NaOH 1 M) solution to achieve pH 6.0. The neutralized suspension was washed by distilled water 2 times the volume of HCl then kept alone for 2 hrs. The suspension washing was done 3 times. Afterwards, it was dried by using a tray dryer in 50°C for 24 hrs until it reached 10-20% moisture content. Once dry, the starch was milled by using a blender and then sieved to 80 mesh. It was then packed and stored in -18ºC freezer until used.

As much as 40.0 g of hydrolyzed Arrowroot starch was made into 20% w/v suspension in deionized water and was preheated at 80ºC temperature for 5 min [3]. Starch paste was then heated at 121ºC temperature by using an autoclave for 15 min. After that, the starch paste was cooled for one hour at room temperature, and then stored in a refrigerator at 4ºC for 24 hrs. After that, it went back for two more cycles of autoclaving-cooling at a temperature of 121ºC and 4ºC. Samples were dried using freeze dry and sieved to 80 mesh and packed in a plastic bag. Samples were stored at a temperature of -18ºC until use.

As much as 40.0 g of hydrolyzed Arrowroot starch was made into 20% w/v suspension in deionized water and was preheated at 80°C temperature for 5 min [3,7]. Starch paste was then heated in 121ºC temperature by using an autoclave for 15 min. Afterwards the starch paste was cooled for one hour in room temperature, then stored in a refrigerator at 4ºC for 24 hrs. The one cycle AC modified starch paste was then reheated at 50ºC temperature. The starch paste was then diluted to a concentration of 10% w/v by using acetate buffer and acetate buffer mixture containing pullulanase enzyme with the concentration of 10.4 U/g starch in 1:1 ratio. Samples were incubated at 50ºC for 24 hrs in a shaking water bath. After that, the samples underwent two cycles of autoclavingcooling at 121ºC and 4ºC. Samples were dried by using freeze dry method, sieved to 80 meshes, then packed in a plastic bag. The samples were stored at -18ºC until use.

Some samples of modified arrowroot starch were weighed and sprayed by water evenly until 20% moisture content was reached. The samples were stored in heat-resistant plastic at room temperature overnight [6,8]. The sample was then heat-treated in 121ºC autoclave, divided into two different durations, 15 min and 60 min. Afterwards the samples were dried again in 50ºC oven for 24 hrs. They were sieved then stored in -18ºC freezer until use.

1 g of modified arrowroot flour was taken and centrifuged. Samples were washed by 8 ml of 80% ethanol and subsequently centrifuged at 554 × g for 10 min. The process was repeated twice [9,10]. The starch precipitate was added 20 ml of sodium acetate buffer (0.1 M pH 5.2) and 5 ml of enzyme solution containing pancreatin and amyloglucosidase extract. The samples were incubated in a shaking incubator at 37ºC for 120 min, and then centrifuged to obtain resistant starch precipitate. An enzyme solution was prepared by suspending 3.0 g pancreatin into 20 ml of deionized water, stirred for 10 min at room temperature, then centrifuged at 1500 × g for 10 min. A total of 13.5 ml of supernatant pancreatin plus amyloglucsidase 210 U and plus 1.25 ml of deionized water. RS resistance against gastric fluid in in vitro model

A total of 0.2 ml of L. acidophilus 2B4 culture aged 1 day was pipetted and put in a solution mixture of 50 ml basic MRSB+2.5% RS and 50 ml of sterile water+2.5% RS [12]. The solution was then incubated for 24 hrs at 37ºC. After 24 hrs of incubation, 1 ml was pipetted and put into a diluting solution of 10 ml NaCl 0.85% and vortexed to obtain 10-1 dilution. Further dilution was done up 10-7 in similar manner. Fertilization was done at 10-5 to 10-8 dilution via MRSA media in a petri dish. Petri dishes were incubated at 37ºC in an inverted position. The same procedure was carried out using inulin commercial prebiotics as positive control.

L. acidophilus 2B4 bacteria by the age of 24 hr incubation were prepared [13]. The bacteria were grown in basic MRSB media (without glucose) containing RS 2.5% (w/v) and MRSB media (contains sucrose) as a negative control. They were further incubated at 37ºC for 24 hrs and the number of bacteria was calculated after 0 and 24 hrs by pouring method. The same procedure was carried out using commercial prebiotics inulin as a positive control.

Growth Percentage of probiotic and pathogenic bacteria in resistant starch

L. acidophilus 2B4 probiotic bacteria and pathogenic bacteria E. coli by the age of 24 hrs incubation were prepared [14,15]. The bacteria were grown in basic MRSB media (without glucose) containing RS 2.5% (w/v) and MRSB media as a negative control. It was further incubated at 37ºC for 24 hrs and the number of bacteria was calculated on 0 and 24 hrs by pouring method. Growth percentage of probiotic and pathogenic bacteria were determined by using the sum of final bacteria growth increase formula (log CFU/ml) at 24 hrs incubation divided by the initial bacterial counts (log CFU/ml) in 0 hour then multiplied by 100%. The same procedure was carried out using commercial prebiotics inulin as a positive control.

Analysis of variance was conducted to determine whether there are differences between the variables tested. The variables in this research were the treatment of resulting prebiotic. The tests were conducted with 95% level of confidence (α=5%). If there was any significant difference between test variables, the analysis would continue to post hoc Duncan test. Analysis of variance was done using SPSS software 20.00.

Analysis was performed in vitro to RS 3 arrowroot starch modified isolates in pH 1, 2, 3 and 4 for 4 hrs. Based on this research, it was found that RS level in samples can significantly affect its resistance to stomach acid hydrolysis (Figures 1 and 2). Starch modified by AH, AHHMT, AHAC, AHAC-HMT, AHDAC, and AHDAC-HMT modification resisted artificial gastric acid with 93%, 96%, 97%, 97.5%, and 98% of resistent starch level respectively. Food within stomach is under acidic conditions (pH 2-4) and will reach the intestine after 2 hrs [16]. Crystallites formed from autoclaving-cooling and HMT is shown to improve RS resistance from stomach acid hydrolysis. Crystallites can be resistant to hydrolysis within digestive tract. Short chain fraction in the crystallite’s formation can be improved through acid hydrolysis and debranching processes [17]. Short chain fraction will form a double helix structure with another short chain fraction. Double helix structure binds one another to form crystallites [3]. On the other hand, HMT treatment can enhance the crystalline structure of starch granules during the process of modification, as well as increase bonding interactions between amylose-amylose chains, amylopectin-amylopectin chains, and amylose-amylopectin chains. This forms a structure that is more compact and stable [18]. Food can be a source of prebiotic if at least 96% of said food can resist gastric acid hydrolysis for 2 hrs [11]. According to other studies, food can be a prebiotic candidate if less than 88% are not hydrolyzed by gastric acid after passing through the stomach [19]. RS 2 and RS 3 resistance isolated from banana flour that can reach the large intestine were more than 98% and 96% [20]. Same instance was found for RS 2 of arka and granola potato varieties [16]. The resistance of insoluble dietary fiber from banana flour and banana flour grand mas fermented or unfermented to gastric acid hydrolysis ranged between 91-96% [21]. Meanwhile, modified taro flour RS obtained from fermentation treatment with 1 autoclaving-cooling cycle has more than 87% resistance against gastric acid [22]. 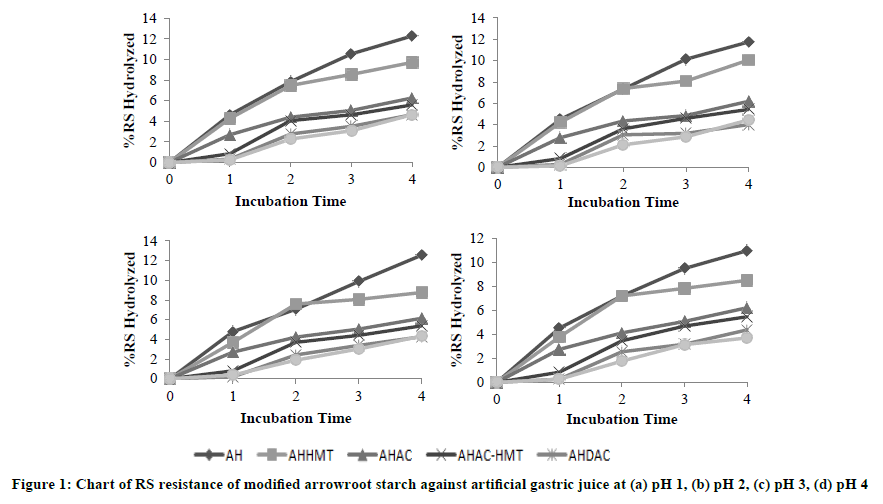 Similarly, mMRSB+2.5% RS 3 of AHDAC arrowroot starch media and mMRSB+2.5% RS 3 of AHDAC-HMT arrowroot starch media increased the growth of probiotic bacteria at 3.33 log CFU/ml and 3.23 log CFU/ml respectively. However, the highest growth of probiotic bacteria when grown on mMRSB+2.5% inulin media was 3.66 log CFU/ml and mMRSB+2.5% glucose media was 3.92 log CFU/ml. mMRSB media was used as control to see the maximum growth achieved by LAB probiotic. This is because it is easier for prebiotic LAB to take advantage of inulin and glucose as carbon source since both have lower degree of polymerization (DP) (10-12) [23] compared to resistant starch with DP value of 13-24 [3]. Previous research on GFC profile of arrowroot starch suggests that AHDAC and AHDAC-HMT modification increase short chain fraction as a result of degradation of amylopectin and amylose long chain molecules [24].

RS 3 selectivity in bacterial growth was expected because during the modification process, starch components hydrolyzed into polymers with lower degree of polymerization (DP). Thus, they are more easily used by bacteria as a carbon source for cell growth. Inulin, oligosaccharides, and resistant starch can stimulate the growth of probiotic bacteria such as Lactobacillus sp. and Bifidobacterium sp. [11,16,20,21,27-29].

Arrowroot starch with AHDAC modification suppressed the growth of pathogenic bacteria, E. coli, by -5.27%. Similarly, inulin was able to suppress the growth of E. coli by -14.93% (Figure 5). Negative value means that the pathogen has no growth in media containing resistant starch. Meanwhile, arrowroot starch from AHDAC-HMT modification can stimulate the growth of E. coli by 67.24%. This is because during HDAC-HMT modification process glucan chain length distribution changed, resulting in a decrease of starch polymerization degree. Combination of acid treatment, debranching, and autoclaving-cooling cycles on arrowroot starch showed a trend of increasing glucan chains with DP 6-8 coupled with decreasing glucan chain for DP 13-24 and 25-30 [3]. Corn starch with HMT modification (with or without annealing) can increase DP 6-8 and decrease DP>37 [6].

Previous research pointed out that maltodextrin has DP 6-8. E. coli can utilize maltodextrin as a substrate for growth. E. coli has periplasmic amylase to reduce maltodextrin into smaller sized molecules [30]. This data showed that RS 3 arrowroot starch with AHDAC modification has the highest ability to suppress the growth of E. coli since the bacteria were unable to use it as growth substrate. Based on several studies, RS 2 and RS 3 of banana flour [20,21] and RS 2 of starch potatoes [16] were able to suppress the growth of pathogenic bacteria such as EPEC and Salmonella typhimurium.

This research was funded by PT. Indofood Sukses Makmur Tbk. through Indofood Research Nugraha (IRN) program in year 2015- 2016. Thanks also to Dr. Irma Isnafia Arief S.Pt., M.Si., who has supported the course of this research.