Nowadays, pandemic coronavirus disease COVID-19, first appeared in Wuhan, China, in December 2019, results in serious global threats to public health, economic and social habits. The aim of this work is to design new compounds with general pharmacophores that mimic seine protease inhibitors (such as camostat mesylate), TMPRSS2 inhibitors, antiviral agents and mucolytic cough suppressant agents. The designed eight compounds were subject to molecular docking study, drug-likeness and in-silico ADMET prediction. Most of the compounds, especially TDa, TDd, TDe, TDf and TDh exhibited good results in docking study inside TMPRSS2 active site and bioavailiability and toxicity evaluation. They could be promising candidates as drug leads for development anti-SARS-Cov-2, the fatal pandemic disease, and therapeutics in the near future.

From highly pathogenic viruses that have arisen in the last 40 years, Ebola viruses, Sever Acute Respiratory Syndrome (SARS-coV) and Middle East Respiratory Syndrom (MERS-coV) which appeared in 2012 [1-3]. Until now, there is no vaccines or therapeutic drugs approved from FDA, and their treatments depends on drug overlapping using broad spectrum antiviral drugs [4].

This step activates the glycoprotein of COVID-19 and facilitate its entry into the target cell. Once the virus enters cytosol of human host cell, +SSRNA released, then RNA transcription and replication occur. New viral RNA is directed to endoplasmic reticulum, and assembly takes place by the aid of Golgi intermediate. Then viral RNA and differentiated protein fragments assemble and form vesicles which are transported to host cell surface and released by exocytosis process to be ready for attacking new alveoli cells [17]. Figure 2. Figure 2: The replication cycle of coronavirus and the role of proteolytic enzyme TMPRSS2 [17].

Development of serine protease inhibitors may help in preventing the entrance of COVID-19 into alveoli cells and block viral infection without affecting on ACE-2 receptor enzyme and its vital activity in treatment of hypertension. 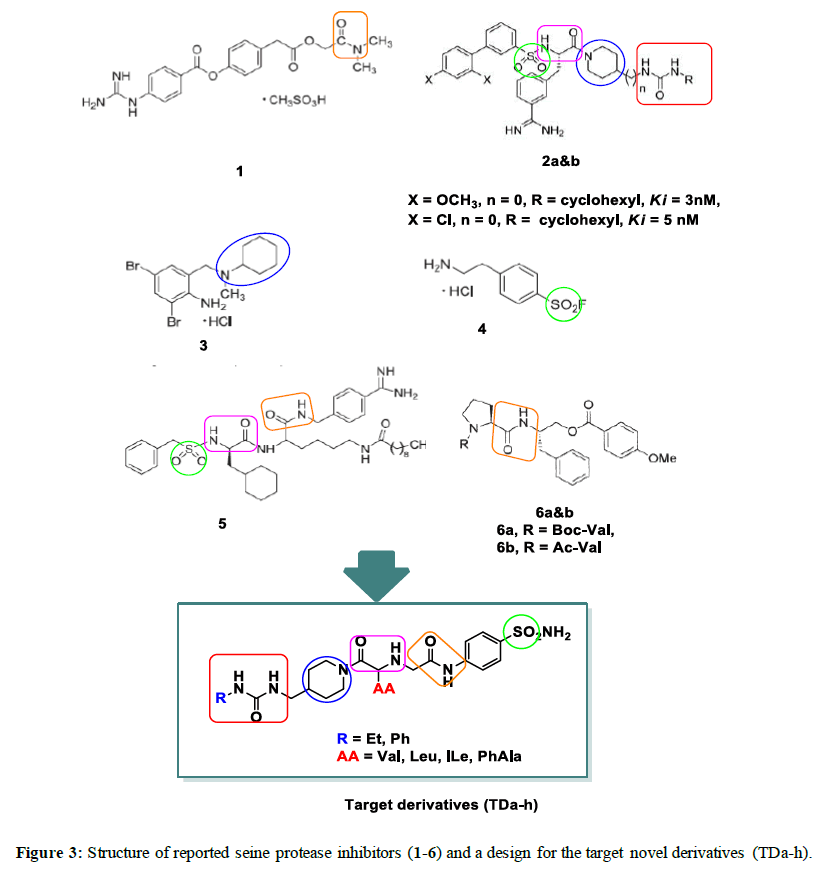 Figure 3: Structure of reported seine protease inhibitors (1-6) and a design for the target novel derivatives (TDa-h).

All the designed compounds TDa-h were subjected to molecular docking study as well as drug-likeness and in-silico ADMET prediction.

All the designed compounds were built using ChemDraw Ulta 12.0. They were energy minimized by using MOE 2014.0901 system. The docking experiment was carried out using TMPRSS2 enzyme (PDB ID: 5CE1) linked to its ligand [23]. Downloaded enzyme and its ligand were prepared for docking by removing water molecules and incomplete residues then hydrogen added and the optimized protein was saved as pdb file, which in turn used for molecular docking studies. Ligand derivative was docked and the best pose and binding score was selected. The lead compound, camostat mesylate as well as the designed compounds was prepared for the docking experiment. The prepared data base was used for docking. The results of the docking scores and H-bonding interactions for the best poses were recorded in Table 1.

To test the ability of the rationalized derivatives as anti-SARS CoV-2 agents, molecular docking study was done using Molecular Operating Environment (MOE 2014.0901) software. The crystal structure of target protein, human serine protease hepsin in complex with its inhibitor, 2-[6- (1-hydroxycyclohexyl)pyridin-2-yl]-1H-indole-5-carboximidamide, was downloaded from Protein Data Bank (PDB ID: 5CE1) in a resolution of 2.50 Å [23].

By docking ligand compound inside enzyme active site, it was found that it forms four hydrogen bonds with His203, Cys349, Gly380 and Asp347 amino acids and docking score = -7.79 Kcal/mol.

The lead compound, camostat mesylate, as TMPRSS2 inhibitor, was drown and docked inside the enzyme. It showed binding score of -7.5383 Kcal/mol and formed 3 H-bonding interactions with Val339, Arg208 and Cys188 amino acids (Figures 4-9).

Figure 4: The co-crystallized ligand at the binding site of the target serine protease protein, it forms three H-bonding interactions with Asp347, Gly380 and His203 amino acids, (A) 3D interactions, (B) 2D interactions.

Figure 5: TMPRSS2 inhibitor camostat at the binding site of the target serine protease protein, it forms three H-bonding interactions with Arg208, Cys188 and Val339 amino acids, (A) 3D interactions, cyan is the ligand and magenta represent camostat, (B) 2D interactions.

Figure 6: Compound TDd at the binding site of the target serine protease protein, it forms three H-bonding interactions with Ala348, Asn209 and Arg208 amino acids, (A) 3D interactions, cyan is the ligand and magenta represents TDd, (B) 2D interactions.

Figure 7: Compound TDe at the binding site of the target serine protease protein, it forms two H-bonding interactions with Cys381 and Cys349 amino acids, (A) 3D interactions, cyan is the ligand and magenta represent TDe, (B) 2D interactions.

Figure 8: Compound TDf at the binding site of the target serine protease protein, it forms two H-bonding interactions with Thr182 and Gly380 amino acids, (A) 3D interactions, cyan is the ligand and magenta represents TDf, (B) 2D interactions.

Figure 9: Compound TDh at the binding site of the target serine protease protein, it forms two H-bonding interactions with Arg208 and Ala343 amino acids, (A) 3D interactions, cyan is the ligand and magenta represents TDh, (B) 2D interactions.

To design a drug candidate, it is better to predict its molecular properties beside pharmacokinetic and pharmacodynamics properties.

Applying Lipiniski's rule of five helps in prediction of considering the bioactive compound as a drug candidate.

Not only is the rule of five the way to state a molecule drug-likeness, but also its cellular permeability, distribution and excretion. These parameters can be predicted through measuring topology polar surface area (TPSA), number of rotable bonds (n-rotb), molecular volum (MV) as well as lipophilic indicator logP ''octanol/water'' partition coefficient.

Tabulated results (Table 2) showed that most of the designed compounds were in accordance with Lipinski's rule with exception of slightly high in molecular weight as in compounds TDb and TDc (MW = 510), compounds TDd and TDe (MW = 544), compounds TDf and TDg (MW = 558) and TDh (MW=592). All of the compounds had acceptable values for number of H-bond bond acceptors, H-bond bond donors and partition coefficient represented by logP which indicating good membrane permeability. All the analogues had molecular volume within the acceptable range except for compounds TDf, TDg and TDh. Derivatives TDa and TDe had good molecular flexibility with number of rotable bonds of 10. Slight increase in TPSA was observed for all compounds to be 162.72Å instead of 160Å. Finally, the best drug-likeness physicochemical properties were observed in compound TDa.

The in-silico ADME properties of the designed compounds (Table 3) showed satisfactory results. All the compounds showed good human intestinal absorption (HIA) ranged from 71–88 %. The designed analogs had very low permeability for in-vitro Caco-2 cells ranged from 0.63 to 0.88 and very low skin permeability. Predicted blood-brain barrier indicating whether the compounds can pass across it to be CNS active or can't pass across it and be CNS inactive compounds with no CNS side effects. All the compounds had very low absorption across BBB and couldn't penetrate CNS with values ranged from 0.03–0.04. Only unbound drugs are available for diffusion and transport across cell membrane and in turn interact with their pharmacological targets. The designed derivatives showed weakly bound to plasma protein in a range of 20.87 to 64.13%.

AMES test and carcino-Mouse/Rate tests were used to predict mutagenicity and carcinogenicity for the tested compound, respectively. Moreover, cardiac toxicity of the target synthesized compounds was checked by measuring their hERG-inhibition, (Table 5).

All of the compounds showed non-mutagenic behavior in AMES test except compounds TDc and TDg. All of them had negative carcinogenic effect in both mouse and rat. Additionally, their cardiotoxic effect was not clear. From the above results, it was justified that the target derivatives may have good characters as lead drugs.

Searching for effective therapeutic agents for treatment of COVID-19 is considered as a major challenge that faces scientific researchers all over the world. Taking into consideration that camostat mesylate is the most acceptable and FDA approved drug as serine protease inhibitor, so designing of new agents mimic it in their chemical structure may be a privilege stone for finding therapeutic agents that help in treatment of this pandemic disease.

The authors have no conflict of interest to declare.