Review on Chemistry and Therapeutic Activity of the Derivatives of Furan and Oxazole: The Oxygen Containing Heterocycles

Review on Chemistry and Therapeutic Activity of the Derivatives of Furan and Oxazole: The Oxygen Containing Heterocycles

Heterocyclic compounds occupy a position of importance in organic chemistry. The present compilation is designed for searching of some new chemical moiety of Furan and Oxazole nucleus-two important heterocycles, having potent therapeutic activity along with their chemistry.

The fundamental process of life involving various biochemical reactions like energy generation and utilization, nerve impulses, sights, metabolism and hereditary information are also based on the participation of many heterocyclic compounds in the form of enzymes, coenzymes, nucleic acids, few vitamins, ATP, serotonin, histamine, few amino acids and so on. Heterocycles are also key components of nucleic acid molecules that control the protein synthesis and the sequence of amino acids [1].

Keeping all discussion in consideration, the present study is designed for searching of some new chemical moiety of Furan and Oxazole nucleus of potent therapeutic activity along with their chemistry.

Furfural as a derivative of furan (Figure 1) was isolated in 1832 by the German chemist Johann Wolfgang Dobereiner as a byproduct during formic acid synthesis [2]. In 1901 the German chemist Carl Harries deduced furfural’s structure. Furan can be prepared from tetra-phenol [3]. They are important structural fragment for many active pharmaceutical ingredient and pharmacologically active compounds [4]. 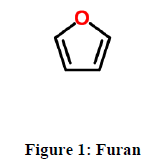 Synthesis of furan and its derivatives

Furan can be obtained from pine-wood [5]. It may be prepared by distillation of mucic acid (Figure 2). Upon heating of mucic acid, the furoic acid is obtained. Furic acid then can be converted to furan by decarboxylation.

Furan can also be prepared from furfural by oxide catalyst (Figure 3).

A general method of preparing furan derivative is by dehydrating 1, 4-diketones or dialdehydes with phosphorous pentoxide / sulphuric acid etc., (Figure 4).

Alternatively, furan derivatives may also be prepared from ethylacetoacetate in presence of iodine (Figure 5).

Furan derivatives may also be prepared by the Feist-Benary synthesis (1902, 1911) where α-chloro ketone is condensed with a β-keto ester in the presence of pyridine (Figure 7) [5].

Au (I)- catalysed hydroamination [6] or hydration of 1, 3-diynes allows formation of 2, 5-diamidofurans (Figure 8). This method can also be expanded for 2, 5-disubstituted furans.

2, 5-disubstituted 3-iodofurans [7] can be prepared in presence of palladium or copper as catalyst. The cross coupling reaction is taken place between beta bromoenol acetate and terminal alkynes followed by iodocyclization (Figure 9).

An efficient substitution reaction [8] of propargylic acetates in enoxy-silances under mild conditions in presence of FeCl3 as catalyst affords γ- alkynyl ketone (Figure 10). The intermediate ketone in presence of TsOH as catalyst forms tri or tetra substituted furan.

Synthesis of Furan [9] can also be obtained by reaction between propargyl alcohols and terminal alkynes, which yields 1, 4-diynes, poly substituted furan and water as a byproduct (Figure 11).

Being a five membered aromatic compound (Figure 12, resonance forms), furan’s behaviour is quite dissimilar to that of the more typical heterocyclic ethers such as tetrahydrofuran. 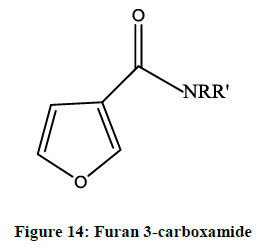 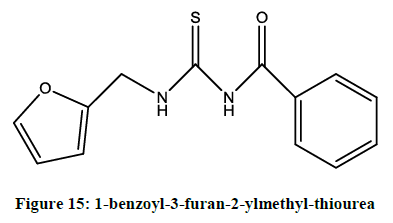 The synthesis of 2, 3a, 8b-tri-hydroxy-3-(thiophen-2-yl-carbonyl)-2-(trifluoromethyl)-2, 3, 3a, 8b-tetra-hydro-4H-indeno[1, 2-b] furan-4-one (Figure 17) [14] was reported by Obafemiet et al. which showed broad spectrum activity against different strains of bacteria of gram positive and negative. 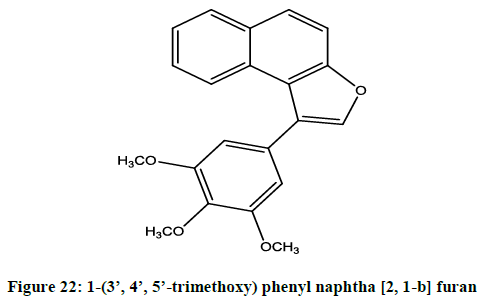 Li et al. [20] reported racemic mixture (Figure 24) of furan lignans. The optical isomers were obtained through a selective hydrolization. The isomers and the racemates were able to shown anticancer activity against QGY-7701 and HeLa cell lines. 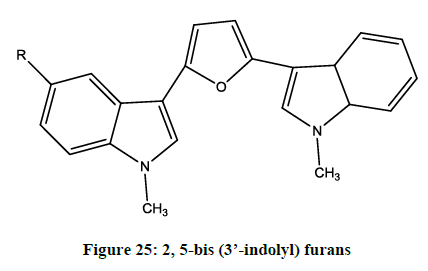 Furan derivatives as analgesic and anti-inflammatory agent: Lee reported [22] 1-furan-2-yl-3-pyridin-2-yl-propenone (Figure 26), as dual inhibitor of COX/5-LOX. The results suggest that FPP-3 may have a benefit in combating inflammation and pain by dual inhibition of COX and LOX. 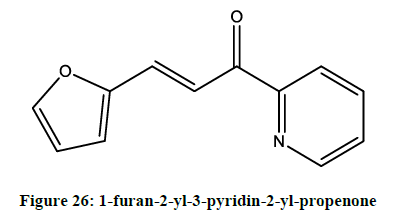 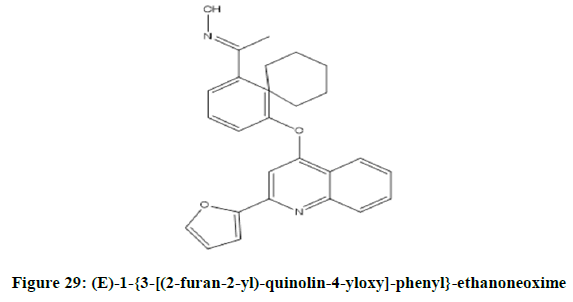 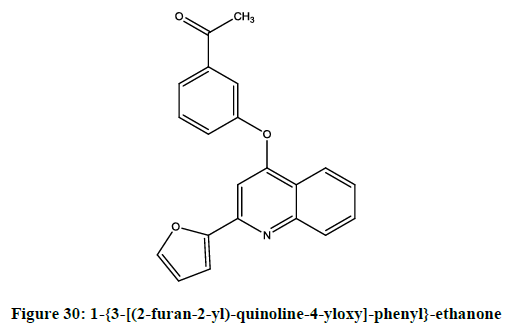 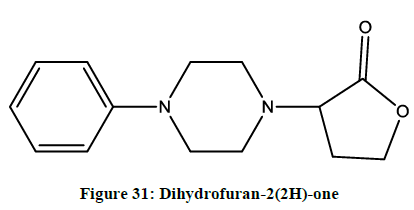 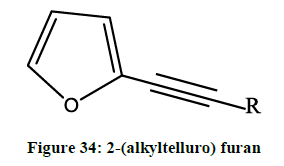 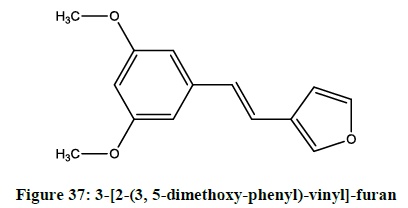 Saito et al. exmined [32] radical scavenging activity and cyto-protective effects of novel furan compounds Figures 39a and 39b, which have potent inhibitory activity against oxygenases such as COX-1, COX-2 and 5-LOX.

Oxazoles (Figure 42) are heterocyclic organic molecules, with an oxygen atom in the 1st position and a nitrogen atom in the 3rd position. Like pyridine they are weakly basic compounds, oxazoles might be considered as furan derivatives, in a sense that they can be derived from furan by a replacement of methane group by an azomethine nitrogen group in the 3rd position. Just like other heterocyclic organic compounds, they have certain pharmacological activities, which are as follows:- analgesics, antimicrobial, anticonvulsants, antiimflamatory, antideprssants, antidiabetic, antiobesity, diabetes. Depending on the different substituent, the oxazole moieties have different activities. In this section we have discussed about properties of oxazoles, different ways of synthesis, about naturally identified oxazoles and also about its several pharmacological activities. 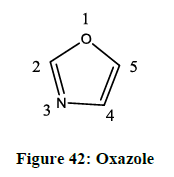 Though, oxazole entity was synthesised only in 1962, the chemistry of oxazole began as early as 1876 with synthesis of 2 methyl- oxazole, Oxazole chemistry came into limelight only after the first world war, when the antibiotic, penicillin was discovered. Further advancement of oxazole chemistry occurred with the invention of the dienes in the Diels Alder reaction and also in the reaction of mesoionicheterocycles involving 1,3 dipolar cycloaddition reactions [35].

Having several photophysical and photochemical activities, oxazoles are used in semiconductor devices as the electrophotographic photoreceptors and in the non-linear optical materials. Oxazoles show a cyclooxygenase-2 inhibitory action and also tyrosinase inhibitory property. They also show certain resembles with penicillin structure as well as its chemistry.

Oxazoles are used in certain polymerisation process and in the condensation of primary to many intermediates like homopolymers, telomers, peptides, pesticides, herbicides and also for agricultural intermediates [36].

Oxazoles play a vital role in several biologically active drug synthesis, which includes analgesics, anti-inflammatory, antimicrobial, anticancer, antidepressants, antidiabetics and anti-obesity too. Oxazole is an important component of spirocyclopropyloxazolones which is an inhibitor of herpes protease. Oxzole derivatives like phenacyclooxazolone are involved in the intermolecular Diels Alder reaction, ensuring the synthesis of the anticancer drug, pancratistamin and phenanthrene alkaloid [37].

Any functional group substitution at the C-4 and C-2 of the oxazole ring plays a vital role in the activity. For example immunosuppressive activities are greatly influenced by the C4 in the oxazole moiety. A substitution of the cinnamoyol residue combined with a functional group substitution at the C-4 and C-2 of the oxazole moiety are very fundamental for tyrosinase inhibitory activity. Also an addition of the double bond at the C-4 position with a phenyl ring being present at the C-2 position plays an imperative role in oxazolone ring. With an increase of the electron donating properties of the phenyl ring, substituted at the C-2 position, the oxazolone ring operating reaction decreases [38]. An exocyclic double bond generally shall act as a dienophile and N- substituted oxazole will participate in intermolecular Diels alder reaction. An electrophilic character is generated in the β carbon (5), if the carbonyl group of the unsaturated oxazolone gets activated by the Lewis acid. Oxazole [39] has a very distinct structure and a variety of application in the pharmaceutical field, natural product and certain bioactive product. For example, anticancer activity is shown by naturally occurring bioactive natural products like the diazonamide and phorboxazole family. I. J. Turchiin, during 1986, first covered the synthesis, chemistry and application of oxazoles with the many synthetic strategies heading directed for oxazole assembly as well as the use of the versatile heterocycles as the intermediates and other pharmaceutical building blocks vastly increased; i.e. several biological activities such as antitubercular, antibacterial, antihyperglycemic, antifungal, antiinflammatory and antiproliferation [40,41].

In the modern day of organic chemistry, the heterocyclic chemistry is of great significance, and a foremost line of investigation. In drug discovery process, nitrogen, sulphur, and oxygen containing 5 membered ring and those heterocyclic compounds play a great role. The numbering of oxazole ring starts with oxygen being the 1st position, the acidity of the hydrogen atoms decreases as follows C2>C5>C4. When the acidity of the hydrogen at C2 position was calculated, the pka came around 20, while for oxazole itself the pKb is found to be 1.17. Oxazole exhibiting definite resonance can be seen in both 1H-NMR and 13C-NMR. The presence of any substituent can change the chemical shift up to 1 ppm. The parent compound shows a resonance between 7.00 and 8.00 in the 1H-NMR spectrum. A characteristic aromatic resonance is displayed by the 13C-NMR. The shielding or the deshielding effect of the C2 substitution on the C4 and C5 resonance is usually <2 ppm. Under IR spectra, oxazole shows absorbance around 1537, 1498, 1326 (stretch length), 1257 (C-H in plane deformation), 1143, 1080 (ring breathing). In the UV spectra the lamda max of the oxazoles depends highly on the substitution pattern. In methanol, the parent ring system indicates the lambda max at 205 nm [40,41].

Oxazole synthesis by dehydration of 2-acylaminoketones.

Reaction between α-haloketones and formamide [43].

Synthesis of oxazole- reaction between an aldehyde and TosMIC [44]. 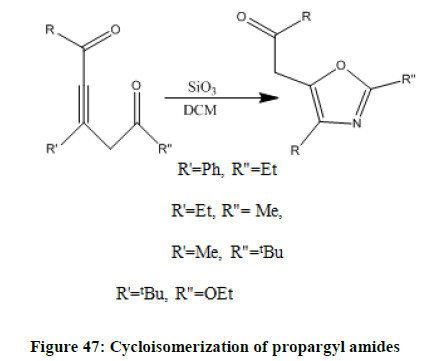 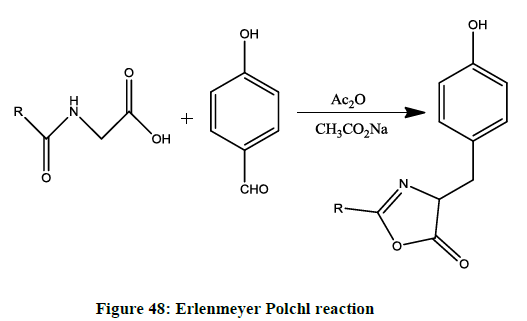 Synthesis of N substituted oxazole taken place by cycloaddition reaction of propargylic alcohols and amines in the presence of carbon dioxide (Figure 49).

Figure 50: Cyclization to get oxazole derivatives

The preferred electrophilic action in 1, 3 oxazoles is taken place at position-5. (Figure 54) When an electron donating substituent activates the ring the electrophillic attack occurs very readily.

The protonation of oxazole (Figure 55) is taken place in the 3rd position, which contains the nitrogen atom.

The Acyl group attack takes place in the 3rd position as it shows high reactivity towards acylation of oxazoles (Figure 57).

Table 1: Some therapeutic active oxazole compounds and their structure

A newly found marine derived macrolide has successfully been isolated from a deep-water sponge family named as neopeltolide (Figure 63). It has been seen that this compound is very effective in stopping or inhibiting the in vitro proliferation of the human lung adenocarcinoma, the ovarian sarcoma causing cancer and murine leukemia cell lines. 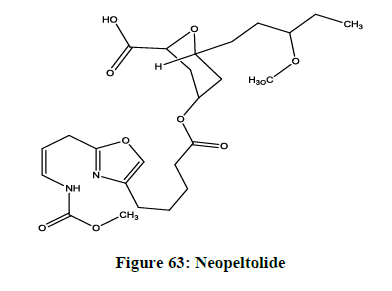 Hennoxazole (Figure 64) is isolated from a marine source, active against herpes and a peripheral analgesics, containing a bisoxazole unit muscoride [60].

An atypical linear hybrid polypeptide or non-ribosomal peptide antibiotics, which was discovered by fermenting an extract of the marine gliding bacterium Rapidithrix sp.

It is a new natural source of bengazole A (Figure 66), which is extracted from the bioassay guided fractionation of extract of the sponge Dorypleressplendens. This compound shows growth inhibitory activity to seven murine and human cancer cell lines [63]. 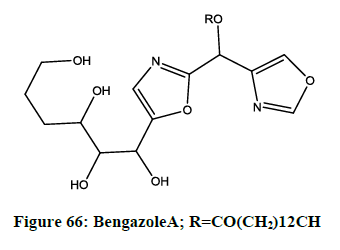 Leucascandrolides A (Figure 67) and B were isolated by Pietra and coworkers from a calcareous sponge leucascandracaveolata, it was collected from the east coast of New Caledonia, Coral Sea [69]. 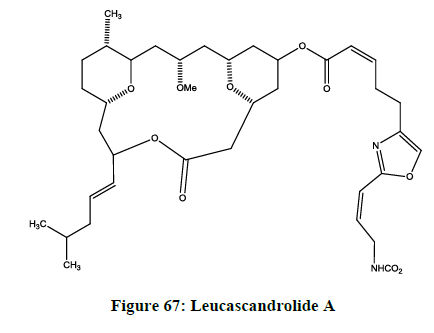 The cytotoxic activity of diazonamide A (Figure 68) was evaluated against a panel of three human tumour cell lines, which included lung (A549), colon (HT29), and breast [70], which was isolated from the ascidian Diazona sp. Collected from Indonesia. 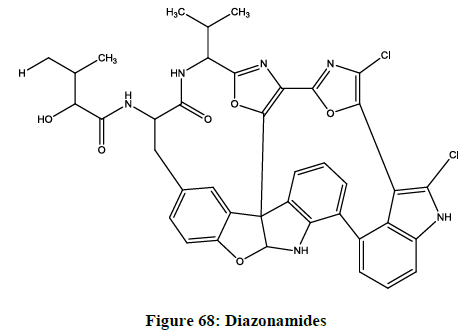 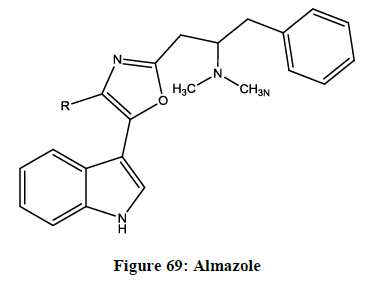 It is isolated from the red seaweed called Haraldiophylum found in the Dakar coast [71].

It exists in diversity of natural products ranging from the comparatively simple pimprinine (Figure 70) and streptochlorin (Figure 71) to the complex diazonamide A. Pimprinine has a variety of activities, as antibiotics, fungicidal, anti-epilepsy effects and monoamide oxidase inhibition. The diazoamides A has activity against HCT-116 human carcinoma and B-16 murine melanoma cell lines. 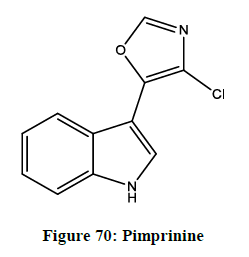 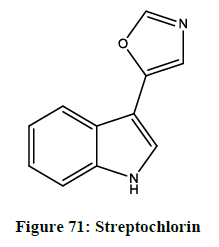 The 2-(pyrrole-2-yl) oxazoles known as phorbaxoles A-D (Figure 72 A-D) are tyrosine- proline dipeptide derivative, chlorinated on the pyrrole. On the 4th position of the oxazole, phorbazole A is substituted as like as diazonamides [60]. 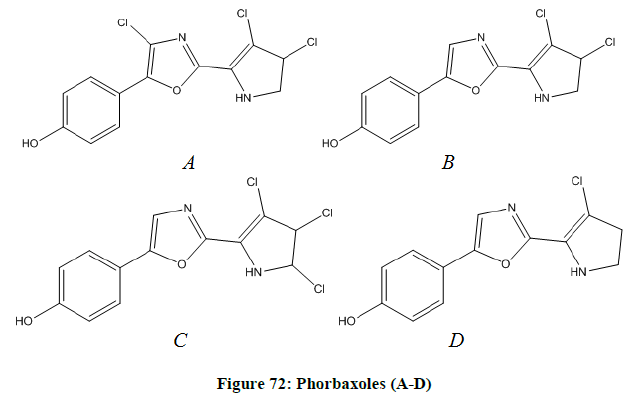 Two important heterocycles Furan and Oxazole and their derivatives are discussed in details including the preparation procedures along with their wide range of medicinal importance as broad spectrum antimicrobial, antileishmanial agents, genotoxic, and CNS active agents both centrally and peripherally, fungicides, herbicides, antioxidant agent etc., which will be helpful in conducting of further research works in relevant field of synthetic chemistry.