Review on Pyridine Analogues as Anti-Microbial, Anti-TB and Anti-oxidant Activity

Review on Pyridine Analogues as Anti-Microbial, Anti-TB and Anti-oxidant Activity

Pyridine, its benzo and pyridine-based compounds play diverse roles in organic chemistry. As ligands, solvents, and catalysts they facilitate reactions; thus, descriptions of these new ligands and their applications abound each year. Tuberculosis (TB), a disease caused mainly by the Mycobacterium tuberculosis (Mtb), is according to the World Health Organization (WHO) the infectious disease responsible for the highest number of deaths worldwide. A series of pyridine derivatives were designed and synthesized as new anti-Mycobacterium tuberculosis agents. Anti-Microbial testing towards selected gram-negative bacteria, gram positive and fungi. The Anti-Bacterial activities of 4 & 7 analogues compared with different standard drugs. The objective pf this review article is to analyse different properties of Pyridine analogues.

Pyridine is a basic heterocyclic organic compound with the chemical formula C5H5N. It is structurally related to benzene, with one methine group (=CH−) replaced by a nitrogen atom. Pyridine is a privileged among heterocycles; its compound has been noted for their therapeutic properties such as antimicrobial, anti-tb, antioxidant, etc. It is a highly flammable, weakly alkaline, water-miscible liquid with a distinctive, unpleasant fish-like smell. Pyridine is colourless, but older or impure samples can appear yellow. The pyridine ring occurs in many important compounds, including agrochemicals, pharmaceuticals, and vitamins. Historically, pyridine was produced from coal tar. As of 2016, it is synthesized on the scale of about 20,000 tons per year worldwide. Tuberculosis is major threat for mankind from past several decades. The last surveys conducted by WHO pointed out 9.6 million new cases of the disease and 2 million deaths in 2015 even surpassing the number of deaths caused by the human immunodeficiency virus (HIV). Effective treatment 0F TB is reliant on several bacterial and sterilising drugs administrative in combination for an adequate duration, to guarantee antimicrobial efficacy while preventing selection of drugs resistant mutants and achieve permanent cure. The development of new and different antimicrobial agents has been a very important step and much of the research program efforts are directed toward to the design of new and available drugs, because of the unsatisfactory status of present treatments of microorganisms, drug side effects, and the acquisition by the infecting organisms of resistance to the present drugs. The shortage of new antibacterial drugs and increasing resistance of bacteria to antimicrobial agents are important issues in drug development studies. New antimicrobial compound is a priority in current research.

It is an important challenging task for medicinal chemists to develop new anti-microbial, anti-TB and anti-oxidant agents. There are two basic approaches for development of new drugs: (a) Synthesis of analogous and their modifications as well as derivatization gives novel substituted compounds for better and improved treatment (b) Searching and synthesis of novel compounds, that the bacteria’s and diseases has never been presented before.

Kumar et al (2007) synthesised a series of benzoic acid hydrazones and their nicotinyl derivatives (1) and tested them for antitubercular activity against a Mycobacterium tuberculosis strain (MTB). The agar dilution method was used to investigate antitubercular activity in Middlebrook 7H11agar medium enriched with OADC. The most effective compound was discovered to be nicotinic acid N-(3,5-dinitrobenzoyl)-N'-(4-methoxybenzylidene)-hydrazide (1a) [1] (Figure 1). 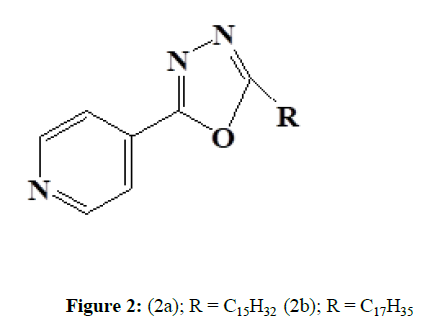 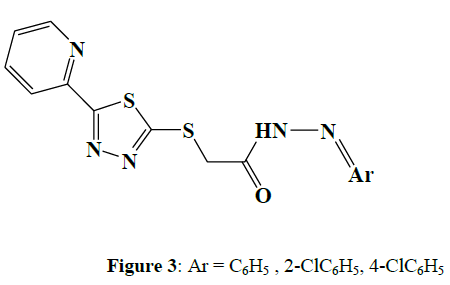 Sriram et al. (2010) synthesised twenty novel 2,10-dihydro-4aH-chromeno [3,2- c] pyridin-3-yl derivatives [4] by reacting 3-formyl chromone (sub)-2-amino pyridines with N1-(prop-2-ynyl) arylamides with inside the presence of indium triflate. The compounds were tested in vitro and in vivo for preliminary activity against Mycobacterium tuberculosis H37Rv (MTB) and multi-drug resistant M. tuberculosis (MDR-TB). N-[(4aS)-2- (3-methyl-2-pyridinyl)-10-oxo-2,10-dihydro-4aHchromeno [3,2-c] is one of them. pyridin-3-yl] In-vitro, the most active compound was found to be methyl-4-ethylbenzenecarboxamide, with MICs of 0.22 and 0.07 g/mL against MTB and MDR-TB, respectively (Figure 4). 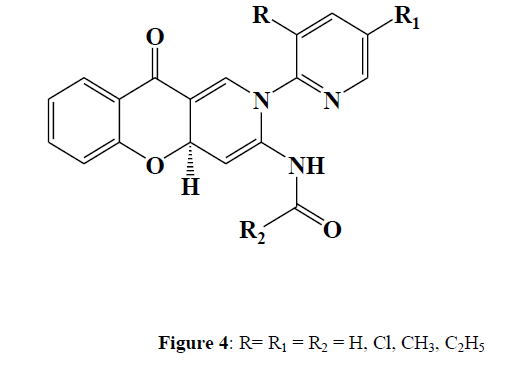 Oluseye K et al synthesized and screened a series of novel imidazo [1,2-a] pyridine carboxamide derivatives for their anti-tuberculosis properties. These compounds were designed based on reported anti-tuberculosis properties of the indole carboxamides (I2Cs) and imidazo[1,2-a] pyridine carboxamides (IPAs). In this series, we identified compounds 15 and 16 with excellent anti-TB activity against H37Rv strain of tuberculosis (MIC = 0.10 – 0.19 μM); these compounds were further screened against selected clinical isolates of Mtb. Compounds 6 and 7 showed excellent activities against multidrug resistant (MDR) and extensively drug resistant (XDR) strains of TB (MIC range: 0.05 - 1.5 μM) with excellent selectivity indices (Figure 6). 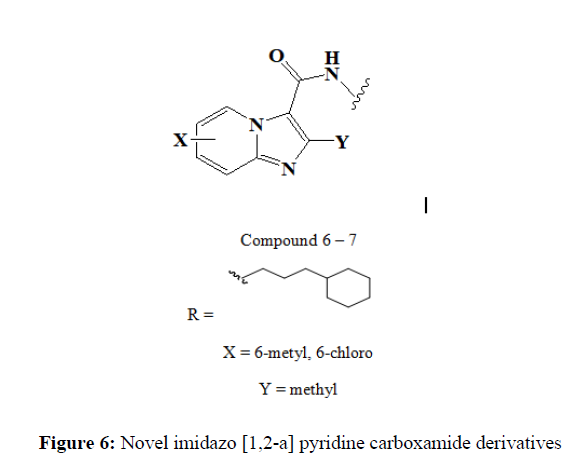 Jineetkumar et al (2018) synthesized a series of 6-(4-nitrophenoxy)-1H-imidazo [4,5-b] pyridine derivatives. In vitro antitubercular activity of newly synthesized compounds against the virulent strain H37RV of M. tuberculosis was tested. Few compounds have demonstrated appealing anti tubercular activity; among the active compounds, 8c, 8g, 8i, and 8u have demonstrated good potency against M. tuberculosis strain. Compounds 5c, 5g, 5i, and 5u were discovered to have MICs between 0.5 and 0.8 μM, which is very close to the standard reference Isoniazid's MIC of 0.3 μM. Compounds with high MIC were discovered to be substituted with nitro, methoxy, hydroxyl, and halogens such as fluorine, chlorine, and bromine (Figures 7,8). 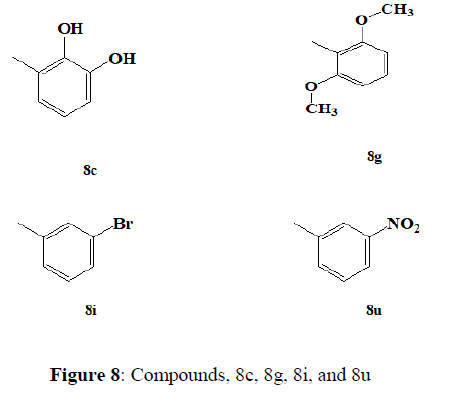 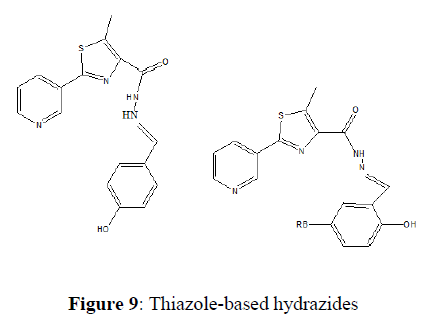 The 1-adamantylthiopyridines 1-9 were evaluated for growth inhibition against 21 strains of microorganisms using agar dilution method as described previously (Prachayasittikul et al., 2008). It was shown that all the tested compounds (α- and β-sulfides) exhibited no growth inhibition against yeast, members of the Enterobacteriaceae and other gram-negative bacilli, except for Catarrhalis (Figure 10). 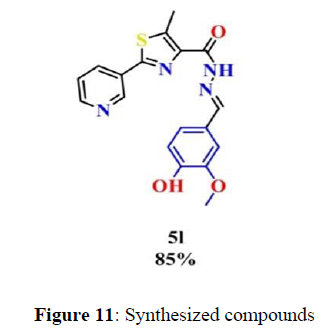 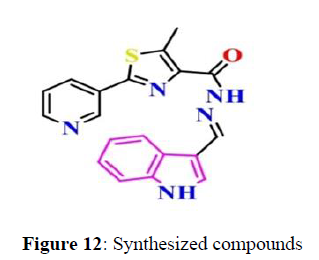 Mitsuya et al. (1984) have developed synthesis of N-(6-phenylpyridin-2-yl) pyridine-2-amines using seffer route (scheme1). The starting material required for the synthesis of biodynamic scaffolds are easily available and details regarding the synthesis given as below. The antimicrobial activities of the synthesized compounds were screened and the results showed that compounds 18 and 24 have good activities compared with Cefepime reference drug (Figure 13). 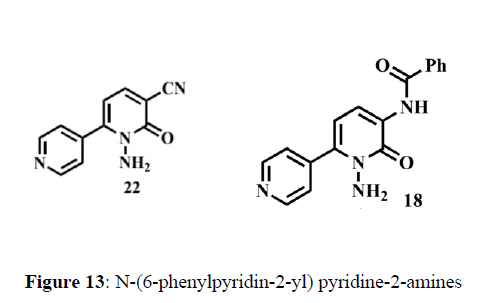 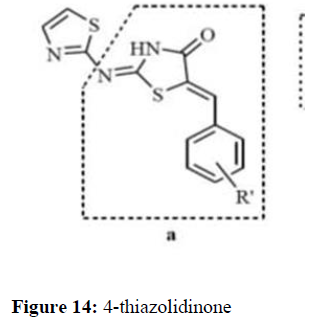 The reaction uses other bases giving different side products along with a little amount of required product. In order to evaluate the generality of this method, several analogues of substituted thienopyridines were synthesized with different 2‐chloro nicotinaldehydes (Scheme 1). The reactions proceeded very efficiently with good yields in less reaction time (0.5–2 h). To demonstrate the general utility of the method, we applied these conditions to a variety of 2‐chloro quinoline‐3‐carbaldehydes (1k–o) prepared according to earlier reported procedure. In all the cases, the reactions occurred smoothly, affording corresponding thiono quinolines in good yields.

Adel Z et al based on the research; we concluded that the new pyrazolo-pyridine analogue (title compound) can be synthesized in two steps with a 74% yield. All spectroscopic data agreed with the expected structure, and based on the antioxidant activity evaluation, the title compound exhibited moderate antioxidant activity, with an IC50 value of 194.06 ± 7.88 μg/mL (0.337 mM) (Figure 15). 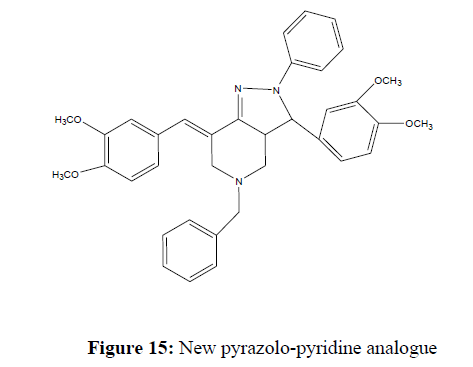 Kalirajan et al. (2020) carried out the oxidation of 1'-hydroxyethylbenzimidazole 5 in the presence of K2Cr2O7, and 5 % dilute acetic acid to obtain 2-acetylbenzimidazole (Scheme 2).

In DPPH scavenging activity, 2-pyridyl derivatives (3aa-af) showed up to 65 mM IC50 value, except 3ad. Remarkably, 3 and 4-pyridyl derivatives showed less than 38 mM IC50, except for 3ba and 3bb. In terms of scavenging activity, standard ascorbic acid exhibited 3 mM. The most active compounds in the series were 3cf and 3bd with 28.10 and 26.02 mM, respectively (Table 1). In FRAP reducing ability; experiments were performed at 5 μM concentrations. To examine the results, compounds showed a narrow range between 90.34 and 137.43 as TEAC. These results are approximately the quarter of gallic acid results on the same assay. In summary, compounds did not show higher or equal activity to standards (Table 1); however, they still have antioxidant capacity as novel chemicals. 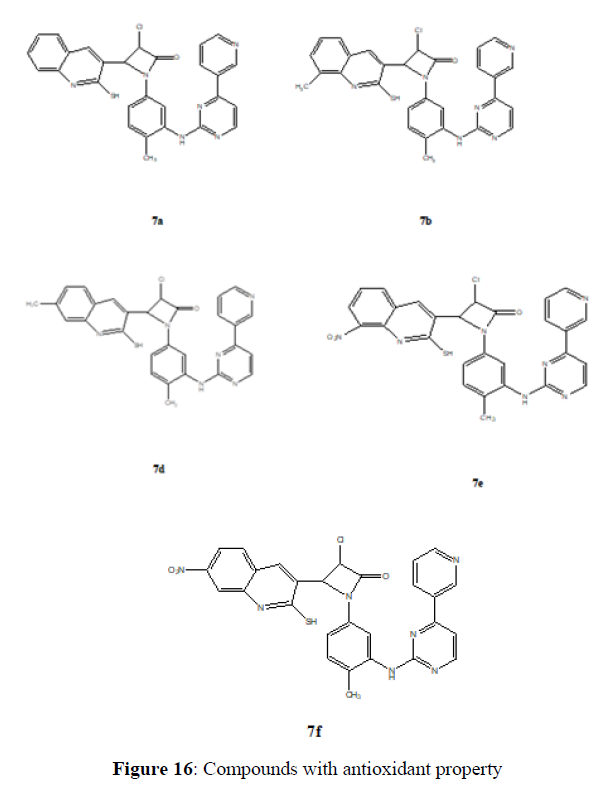 Yunxia et al synthesized via a convenient reaction between CAIL and pyridine or amino-pyridines with high yield. Their antioxidant activities against three kinds of radicals were evaluated in vitro. All of the inulin derivatives have good solubility in water, and exhibit higher antioxidant indices than inulin. These data indicate that the chemical modification of inulin with amino-pyridines would be beneficial to enhance the antioxidant activity of inulin. Moreover, it would be reasonable to presume that the number and the position of amino group on pyridine could influence the antioxidant property of these inulin derivatives. In a 25ml round bottom flask mixture of aldehyde (1mmol), aniline (1mmol) and Trimethylsilyl cyanide (1mmol) was stirred with EPZGR catalyst 20 mg at room temperature for desired time mentioned in Table 1; Entry b completion of reaction was monitored by TLC. Upon completion of reaction crystallization of the product was carried out in ethanol. All the products were purified by same technique and found to be correct. Further structures of the product were confirmed by 1H NMR, 13C NMR, HRMS and IR (Figure 17). 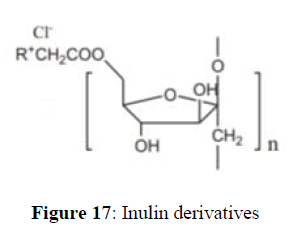 Muhammad k et al. (2015) synthesized imidazo [4,5-b] pyridine benzo hydrazone derivatives having hydroxyl group are showing potent antiglycation and anti-oxidativex activity. The studies also showed that the ability of some compounds to inhibit glycation is indirectly dependent upon their ant oxidative capabilities. The results suggest the compounds studied are possible to play certain role in diabetic complication and oxidative stress diseases (Figure 18).