Three component Biginelli reactions is carried out using aromatic aldehydes, aliphatic amides and 1, 3-dicarbonyl compound to afford corresponding dihydropyrimidinones in the presence of MgBr2 as an efficient catalyst. The advantage of this method includes high yield, environment friendly, reduced reaction time and operational simplicity. Representative compounds of the synthesized products were tested and evaluated as antioxidant agents. Most of the synthesised compounds have potent antioxidant activity.

In the year 1893, Italian Chemist PietroBiginelli proposed a multicomponent reaction. He used ethylacetoacetate, benzaldehyde and urea in ethanol to synthesize dihydropyrimidinones. The acid used here was hydrochloric acid [1-3]. Even though he synthesised this heterocyclic compound, the yield was very less. So scientist started to think about new methodologies for the effective synthesis of this compound.

The main reagents used for this reaction was aromatic aldehyde, urea or thiourea and 1, 3 -carbonyl compound (mainly esters). The product formed from this reaction was Dihydropyrimidinones or DHPMs and their derivatives. These are very important pharmacologically active molecule with a wide range of application in that field. Some application involves antihypertensive agents, inhibitors of fatty acid transporters, calcium channel blockers, α1a - adrenergic antagonists, in mitotic kinesin inhibition, etc. A potent anti- HIV activity (HIVgp-120-CD4 inhibition) is shown by batzelladine alkaloids which contains a dihydropyrimidinone core.

Variations in the reagents, i.e. the change in the substitutions of aromatic aldehyde, using different 1,3 - carbonyl compounds, extend the scope of the original multicomponent resulting in the preparation of many variety of dihydropyrimidinone molecules. Several alkaloids containing this molecule unit have been isolated from marine sources which exhibit so many biological activities [4].

Fundamental targets of organic synthesis are, to synthesis or perform a chemical transformation using three or more components in a single reaction by a catalytic process, avoiding stoichiometric toxic reagents, avoiding expensive purification technique and to avoid usage of large amount of solvents [6]. Therefore, this reaction has received many reviewed interest.

Several improved procedures are reported. Substituted hydropyrimidinones synthesis can be done by using various protic and Lewis acids like, AcOH [7], HCl [8], LiBr [9] etc. Most recently catalysts like polyphosphosphate ester (PPE)[10] ionic liquids [11] montmorillonite KSF [12], lanthanide triflate[13] etc were used for the one pot solvent free synthesis of the molecules. Some of the above processes like reaction using HCl, AcOH catalyst are microwave irradiated to accelerate the reaction. However, many of these reactions involve expensive reagents, needed longer period of time (to complete reaction), strongly acidic conditions, unsatisfactory yield etc, in spite of their potential utility [14].

Magnesium bromide, in recent years, in additives or activated complexes is noticed as a powerful catalyst for the effective transformations such as condensation [15], cyclopolymerisation reactions [16-17] etc. The challenge for a sustainable environment calls for clean procedures that can avoid using harmful organic solvents [18]

Here the reaction we are preceding is the solvent free, i.e., we are not using an external solvent to precede the reaction. Recently, researcher has tried to find an environmentally friendly improved procedure for the Biginelli reaction to achieve high yields under solvent free conditions and they found that magnesium bromide which is an inexpensive and easily available chemical, which can be used as a catalyst result in high yield of the final product for this Biginelli reaction with a short period of time [19].

All reactions were carried out using oven dried glasswares. All the chemicals (reagent and solvent) were purchased from Ranbaxy Chemicals Ltd. The purity of these chemicals was 90-99% and was used without further purification and distillation. 1H-NMR and 13C NMR (400 MHz) spectra were recorded on a Bruker Advance Spectrophotometer. The chemical shift in 1H NMR and 13 C NMR were reported using ppm and deuterated chloroform (CDCl3) was used as NMR solvent. Thin layer chromatography (TLC) was analysed on thin layer aluminium plate of 0.2 mm Merck - precoated silica gel. The spots obtained were observed under UV light (254 nm). Column chromatography (CC) was performed using silica gel Merck 70-230mesh. Recrystallization of the compounds was performed using ethanol. Melting points of individual compound was recorded using Leica Galen III Kofler melting point apparatus and were uncorrected. (Scheme 1)

General procedure for the synthesis of 9-substituted aryl derivatives of [4, 5-d] pyrimidinone (4a-j)

A mixture of ethyl acetoacetate (2 mmol), substituted aromatic aldehydes (2 mmol) aliphatic amides (2 mmol) and magnesium bromide (0.2 mmol) was heated at 100°C with stirring until the mixture turned to solid mass (45 min). After completion (monitored by TLC), the solid was cooled to room temperature and poured onto crushed ice (20 g) and stirred for 10 min. The crude product was filtered, washed with cold water and dried then recrystallized from ethanol. 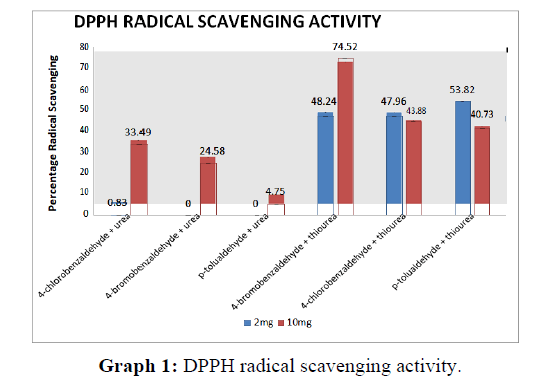 Based on results obtained, we have developed a green, efficient and eco-friendly synthesis for the preparation of aryl substituted pyrimidinone (4a-j) derivatives by one pot three component condensation reactions of substituted aromatic aldehydes, ethyl acetoacetate and aliphatic amides in the presence of magnesium bromide. The product can be easily isolated by simple workup technique, short time, less expensive, ambient reaction condition and give excellent isolated yields. These synthesized compounds screened for antioxidant activity. Most of the synthesised compounds have potent antioxidant activity.

The authors are grateful to the St Aloysius College (Autonomous), Mangalore for financial assistance and Lab. facility and authors also thankful to Indian Institute of Science for spectral and analytical data.