A simple and precise stability-indicating reverse phase high performance liquid chromatography (RP-HPLC) method was developed and validated for the determination of related substances of Saxagliptin drug substance. The method was developed to separate possible degradation and process related impurities. Chromatographic condition was carried out on in Zorbax SB-C8, 150 mm x 4.6 mm, 5μm HPLC column with prepared buffer solution 1.0 ml of ortho phosphoric acid mixed with 0.1% of sodium dihydrogen phosphate solution, mix buffer solution and acetonitrile in ratio of 70:30(%v/v) used as mobile phase (a), mobile phase (b) was acetonitrile. The flow rate was set at 1.0 ml/min and the detection wavelength was 220 nm. Forced degradation study, which covered acid, base, peroxide and thermal degradation and it was performed to prove the specificity of the proposed method. The developed method has been statistically validated according to ICH guidelines and found to be simple, precise and accurate with the prescribed values. Thus the proposed stability indicating RP-HPLC method was successfully applied for the routine and stability sample analysis in quality control.

Saxagliptin chemically named as (1s, 3s, 5s)-2-[(2s)-2-Amino-2-(3-hydroxy-1-adamantyl) acetyl]-2-azabicyclo [3.1.0] hexane-3-carbonitrile. Saxagliptin is a new oral hypoglycemic agent, dipeptidyl peptidase-4 (DPP-4) inhibitor and anti-diabetic for the treatment of type-2 diabetes. DPP-4 inhibitors are a class of compounds that work by affecting the action of natural hormones in the body called incretins. Incretins decrease blood sugar by increasing consumption of sugar by the body, mainly through increasing insulin production in the pancreas and by reducing production of sugar by the liver. The inhibition of DPP-4 increases levels active of glucagon like peptide1 (GLP-1), which inhibits glucagon production from pancreatic alpha cells and increases production of insulin from pancreatic beta cells [1-7]. Literature survey reveals that few analytical methods were reported like RP-HPLC methods [8] in single or in combination with other drugs in pharmaceutical dosage forms. However there was no stability indicating method reported for Saxagliptin active pharmaceutical ingredient. The present study was aimed to develop a simple, fast, economical, selective, accurate, precise and sensitive stability indicating RP-HPLC method for the determination of related substances of Saxagliptin active pharmaceutical ingredient suitable for routine and stability quality control sample analysis. (Figure 1) 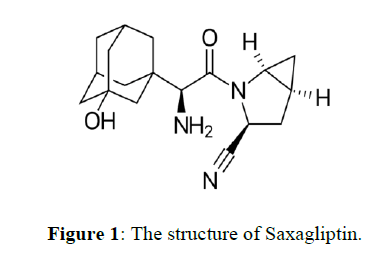 Figure 1: The structure of Saxagliptin.

The method development attempts, forced degradation studies and subsequent validation were performed on Waters Acquity HPLC system with a diode array detector. The data were collected and processed using empower software. The chromatographic analysis was performed with Zorbax SB-C8, 150 mm x 4.6 mm, 5μm HPLC column with prepared buffer solution 0.1% of ortho phosphoric acid mixed with 0.1% of sodium dihydrogen phosphate buffer solution, mix with acetonitrile in ratio of 70:30(%v/v) used as mobile phase (a), mobile phase (b) was acetonitrile. The flow rate was set at 0.8 ml/min, column oven temperature was 30°C, injection volume was 5 μL and the detection wavelength was 220 nm. Preformed this parameter in gradient proportion of mobile phase (a) and mobile phase (b) for 45 minute. A mixture of mobile phase (a) and mobile phase (b) 80:20 (% v/v) was used as a diluent. 4 mg/ml sample solution and related impurities were injected 0.15% specification level with respect to sample concentration.

Development and Optimization of Chromatographic Conditions

The core objective of the chromatographic method is to separate all process impurities and the degradation products from the Saxagliptin. The parameters such as effect of pH on Saxagliptin retention time, type of buffer used and its concentration, solubility in the organic modifier and its effect on detection, plays an important role in reverse phase chromatography method development. An improper choice of buffer, in terms of ionic strength and pH, can show result in poor or irreproducible elution in reverse-phase separation of polar and ionizable compounds. Initial trials were performed on three different columns (Zorbaxeclips plus C8,150x4.6 mm,5μm, Zorbax XDB,150X4.6 mm 5 mm, and Zorbax SB-C8, 150 mm x 4.6 mm, 5μm) using different mobile phase compositions comprised of phosphate buffer and methanol, acetonitrile. It was observed that the initial two columns showed poor performance with several mobile phase combinations, the third column showed good results. Based on these results, the Zorbax SB-C8, 150 mm x 4.6 mm, 5μm column was selected for further method development. The peak symmetry of Saxagliptin was better with acetonitrile than methanol and peak efficiency was higher with sodium dihydrogen phosphate buffer than potassium phosphate buffer. Based on these results, sodium dihydrogen phosphate buffer in combination with acetonitrile was selected for further optimization. Degradation products from all stressed samples along with saxagliptin and its impurities were well resolved under the gradient elution program that was used in the developed method. Mobile phase (a) was a mixture of 0.1 % of sodium dihydrogen phosphate in 0.1% ortho phosphoric acid solution and acetonitile in the ratio 70:30 (%v/v) and mobile phase (b) was acetonitrile. The flow rate of the mobile phase was 1.0 ml/min. The HPLC gradient program was also played a vital role for the resolution of the impurity D with the Saxagliptin peak and for the resolution of Saxagliptin and impurity B. The HPLC gradient program was optimized as: time/% solution B: 25/25, 35/40 and 25/50. The column temperature was set at 30°C. The retention time of the saxagliptin with the optimized gradient program was 20 minutes which is appropriate and the tailing factor of Saxagliptin was found to be 1.0. In the optimized conditions, it has been observed that the Saxagliptin, impurity A, impurity B, impurity C, impurity D, impurity E, impurity G and the degradation impurities were well separated with a resolution greater than 2.5. The system suitability results were given in Table-1 and the developed HPLC method was found to be specific for saxagliptin, its known impurities and degradation impurities.

Stationary phase has played a significant role in achieving the good tailing factor of saxagliptin and separation between impurity B and impurity D. Satisfactory peak shape and the resolution of close eluting impurities were achieved on Zorbax SB-C8, 150 mm x 4.6 mm, 5μm column with the dimension of 150mm x 4.6 mm and 5 μm as particle size, using mixture of solutions 0.1%of sodium dihydogen phosphate, orthophosphoric acid and acetonitrile in ratio of 70:30(v/v) as mobile phase (a) and acetonitrile was used as mobile phase (b). Saxagliptin and all related impurities were well separated by using this method. Method development trials chromatograms were shown in Figures 2-5, IUPAC names of eluted impurities and Saxagliptin were shown in Table 2. Retention time and resolution between Saxagliptin and its related impurities were shown in Table 3.

Figure 2: Trial 1, mobile phase composition, phosphate buffer with pH 3.5/acetonitrile there was no separation achieved between related impurities and Saxagliptin.

Table 2: IUPAC names of saxagliptin and its related impurities, which were separated by RP-HPLC method.

Table 3: Retention time and resolution between saxagliptin and related impurities

The specificity of the developed RP-HPLC method for saxagliptin was demonstrated in the presence of its known process impurities and degradation products. Thorough forced degradation studies were carried out on Saxagliptin to ascertain the stability-indicating property of the developed method. The stress conditions were engaged for degradation studies as per the ICH preferred conditions includes acid, alkali, thermal and peroxide The acid, alkali stress was performed with 1.0 N HCl and 1.0 N NaOH on Saxagliptin for 30 minutes and 3hours respectively at ambient temperature (25±2°C). The thermal stress was done at 105°C for 10 days. The oxidation stress was done with 10% hydrogen peroxide for 24hours at ambient temperature. Peak purity of stressed samples of saxagliptin and the spiked solutions of impurity A, impurity B, impurity C, impurity D, impurity E and impurity G were checked by Waters acquity HPLC with diode array detector (DAD). The data was reported in Table 4.

Limit of detection (LOD) and limit of quantification (LOQ)

The limit of detection (LOD) and limit of quantification (LOQ) of an individual analytical procedure are the lowest amounts of analyte in a sample that can be detected and quantitatively determined with suitable precision and accuracy respectively. The LOD and LOQ for each of the impurities were established by attaining signal to noise ratio of approximately 3:1 and 10:1 respectively, from a series of dilute solutions with known concentrations. Precision was carried out at LOQ level by preparing six individual preparations of Saxagliptin with its related impurities at LOQ level and calculating the percentage RSD for the areas of Saxagliptin and its related impurities. The values of LOD and LOQ for impurities and saxagliptin were found to be in the range of 0.018%-0.06% and 0.015%-0.04% respectively. The %RSD of LOD and LOQ precision was found 3.40% and 3.02% respectively.

The accuracy of an analytical procedure expresses the closeness of agreement between the values determined by the method and conventional true value or an accepted reference value. Accuracy of impurities at each level was established by standard addition of the known quantities of impurities in test sample and calculation of the recovery. The average recovery found for impurity A, impurity B, impurity C, impurity D, impurity E and impurity G is 98.08%, 99.98%, 100.20%, 100.68%, 101.36% and 99.20% respectively.

A simple and precise stability indicating RP-HPLC method was developed and validated for the determination of related substances of Saxagliptin active pharmaceutical ingredient. Stress testing which covered acid, base, peroxide and thermal degradation was performed to prove the specificity of the proposed method and degradation was achieved. The developed method has been statistically validated according to ICH guidelines and found to be linear, precise and accurate with the prescribed values. Thus the proposed RP-HPLC method was successfully applied for the Saxagliptin in routine quality control analysis in active pharmaceutical ingredient.